In a real 'Chak De' moment, a resolute Indian men's hockey team rewrote history as it claimed an Olympic medal after 41 years, defeating a plucky Germany 5-4 to win the bronze in an edge-of-the-seat play-off match of the ongoing Tokyo Olympics 2020 on Thursday (Day 13). Besides, India's newest wrestling star Ravi Kumar Dahiya picked up an impressive silver on his Olympic debut. Now, India has won five medals (two silver, three bronze) at the Tokyo Olympics 2020.

Here are the highlights of Day 13: Ukraines Ivan Losev pours water on himself while competing in the mens 20km race walk final during the Tokyo 2020 Olympic Games at the Sapporo Odori Park in Sapporo on August 5, 2021. | (Photo by AFP)

KT Irfan, Sandeep Kumar, and Rahul Rohilla had a disappointing show in the men's 20 km race walk and they were not able to finish even in the top ten at the Sapporo Odori Park on Thursday.

2. Golf: Aditi Ashok in medal hunt in Tokyo Olympics with blemish-free second round 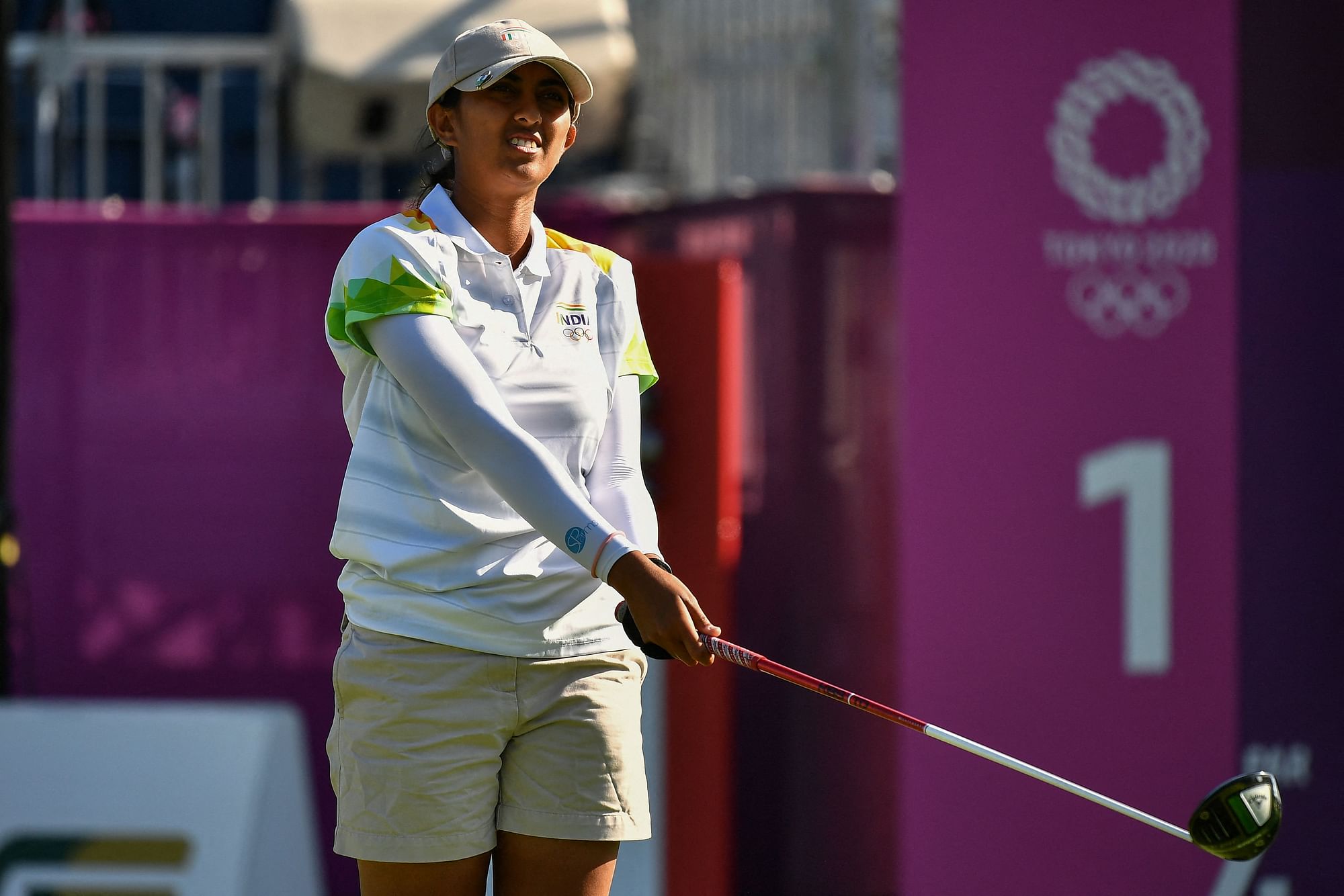 India's Aditi Ashok watches her drive from the 1st tee in round 2 of the women?s golf individual stroke play during the Tokyo 2020 Olympic Games at the Kasumigaseki Country Club in Kawagoe on August 5, 2021. | (Photo by AFP)

Indian golfer Aditi Ashok was in contention for a historic Olympic medal after carding a flawless five-under 66 in the second round of the women's competition on Thursday.

The 23-year-old rolled in five birdies, which included three in her last four holes, on yet another steamy day at Kasumigaseki Country Club to lie tied second on nine-under 133 with Danish duo, Nanna Koerstz Madsen (64) and Emily Kristine Pedersen (63).

Aditi, playing her second Olympics with her mother, Maheshwari, as her caddie, trails leader -- world no.1 Nelly Korda of USA -- by four shots.

Aditi kept herself in prime position of delivering a first-ever medal in golf for India with birdies on Hole Nos. 2, 5, 15, 17 and 18. 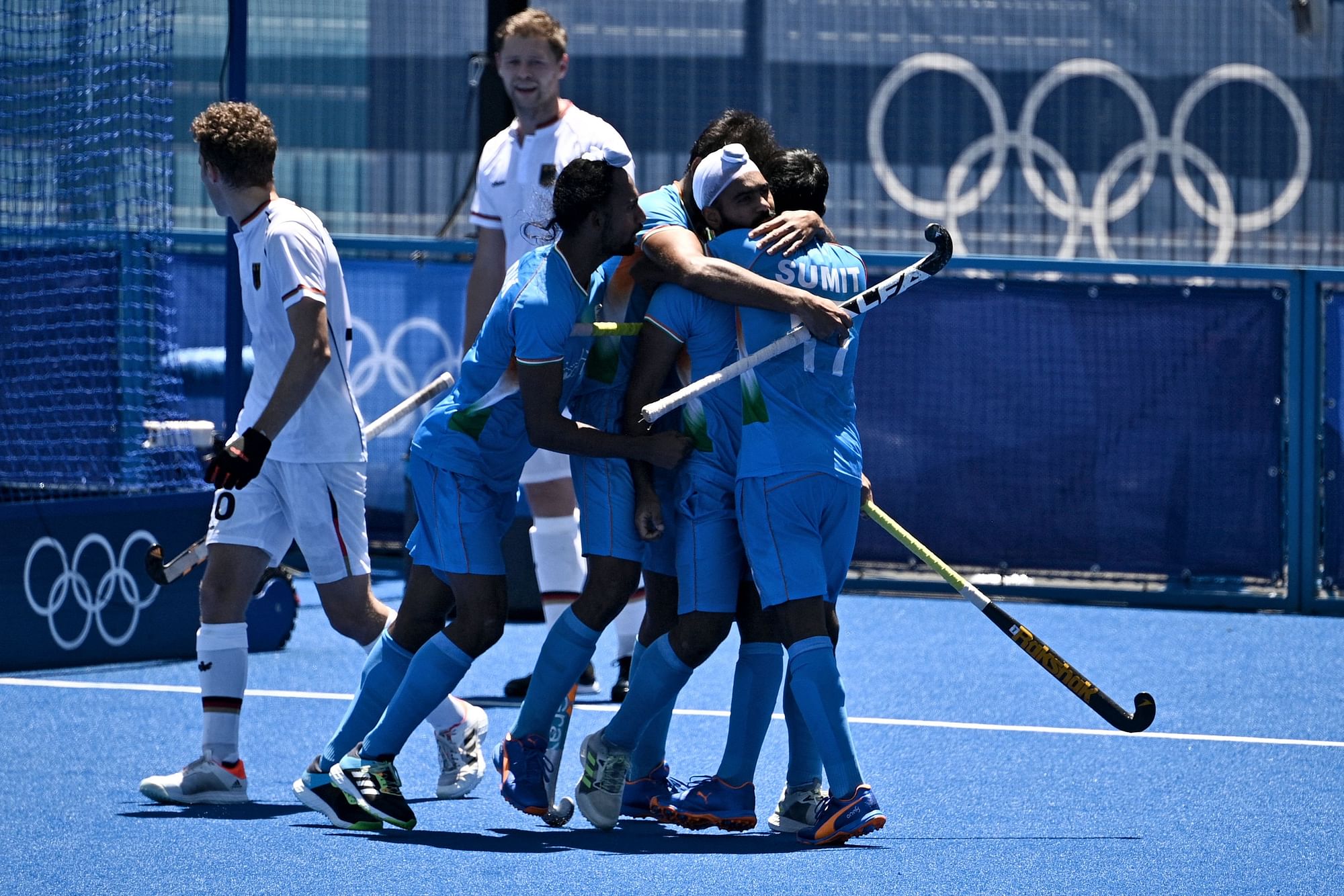 Players of India celebrate after scoring against Germany during the mens bronze medal match of the Tokyo 2020 Olympic Games field hockey competition, at the Oi Hockey Stadium in Tokyo, on August 5, 2021. | (Photo by AFP)

It took 41 years, but the dream of every Indian was finally realised as the men's hockey team beat Germany 5-4 to win the bronze medal at the Oi Hockey Stadium -- North Pitch.

The Men in Blue showed absolute resilience, strength, and winning spirit to register a remarkable comeback win against a strong German team.

Determined to clinch a medal, the Indians made one of the most memorable comebacks in the history of the game, fighting back from a two-goal deficit to turn the match in their favour. 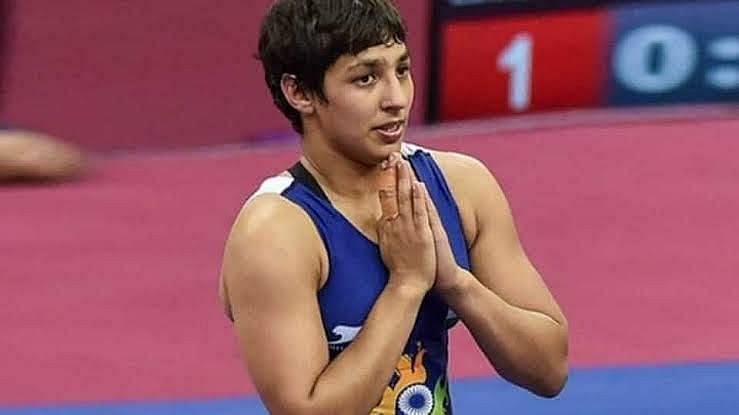 Anshu Malik lost to Valeria Koblova of the Russian Olympic Committee (ROC) in the repechage bout in women's 57kg freestyle wrestling, ending her hopes of making it to the bronze medal match.

Anshu had lost to Iryna Kurachkina of Belarus in the pre-quarterfinal bout on Wednesday.

But Valeria Koblova, who had also lost to Iryna and was also to play in the repechage rounds as she had lost the eventual finalist, proved too strong for Anshu as she emerged 5-1 winner.

The Russian wrestler started well and won a point and though Anshu levelled the score at 1-1, Valeria could not be denied as she won the bout played on Mat B at the Makuhari Messe Hall.

It was a good chance for Anshu in the repechage but she could not capitalise on it. 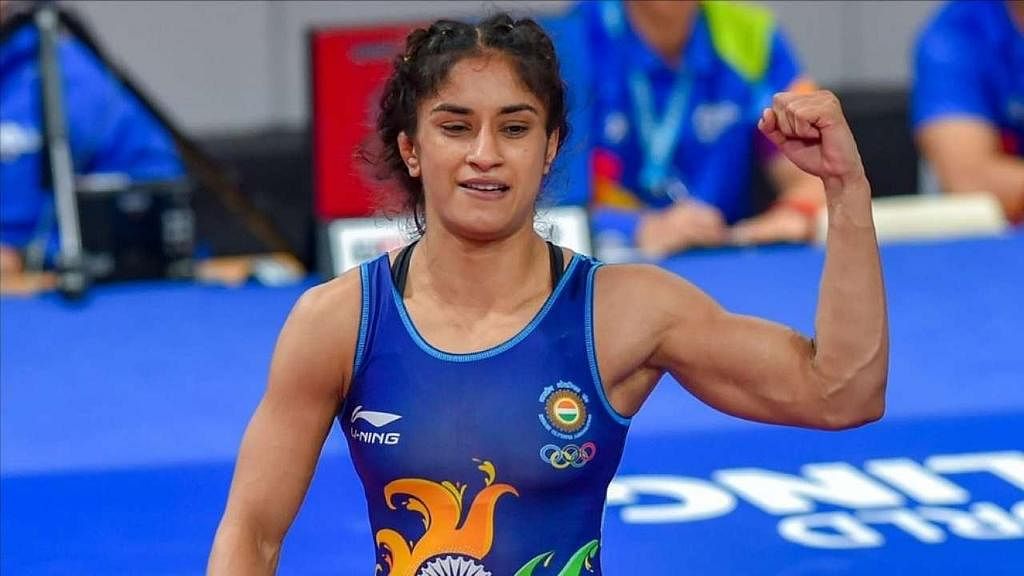 Grappler Vinesh Phogat's hopes of winning a bronze medal were dashed on Thursday as her quarter-final opponent Vanesa Kaladzinskaya of Belarus lost in the semi-final of the Tokyo Olympics. As a result of this loss, Vinesh's hopes of winning bronze through repechage was also dashed.

Earlier on Thursday, Vinesh Phogat lost in the quarterfinals of the women's Freestyle 53kg event at the Tokyo Olympics after going down against Belarus' Vanesa at the Makuhari Messe Hall A Mat B.

Vanesa Kaladzinskaya won against the 26-year-old Indian by pinning her on the mat (victory by fall). The number one seed Indian came under early pressure in the bout as the Belarusian took an early lead by 2-0. Vinesh soon equalised for 2-2 but in the same sequence, Kaladzinskaya grabbed two more points and later another point as the Indian trailed 2-5 going into the second half.

Chasing the bout, Vinesh started the final three minutes with more aggression but the European champion stood strong with firm defence. Kaladzinskaya gave no chance to Indian even after a successful review by Vinesh's side which saw one point for Indian and two points fewer for Vanesa.

Vinesh soon got pinned down by Kaladzinskaya in an absolutely brilliant move as she cruised into the semis of the event. Vinesh had progressed into the quarterfinals after defeating Sweden's Sofia Magdalena Mattsson by 7-1 in the 1/8 finals. 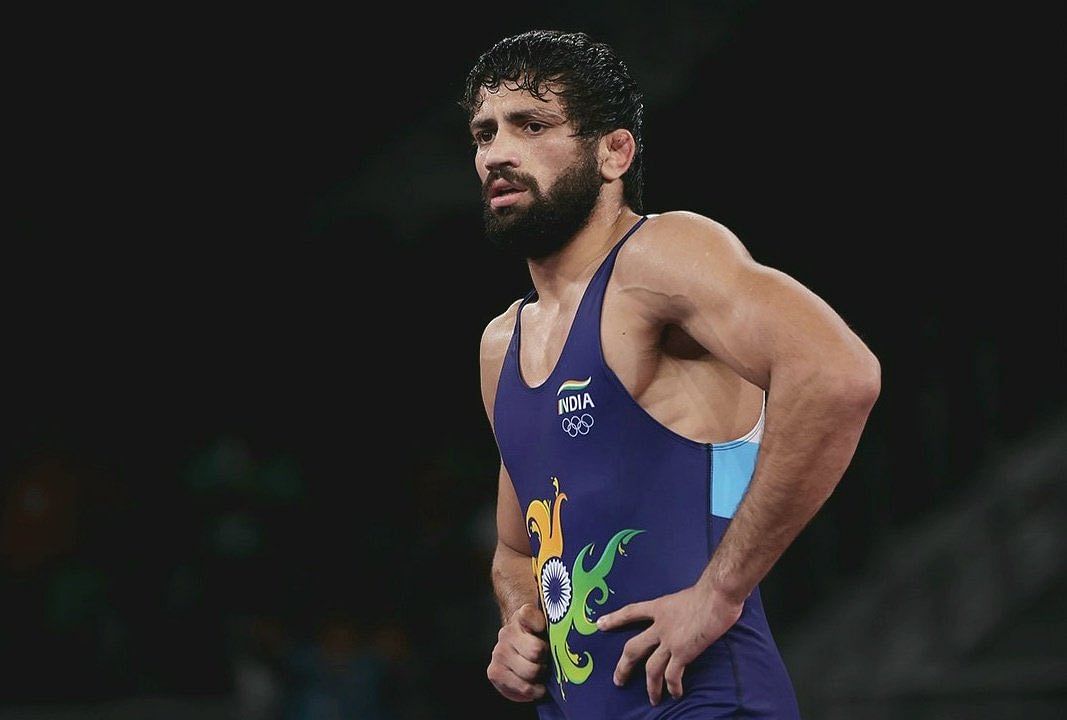 Ravi Dahiya on Thursday became only the second Indian wrestler to win a silver medal at the Olympic Games after he lost the men's freestyle 57kg title clash 4-7 to reigning world champion Zavur Uguev here.

There were expectations that the 23-year Dahiya would become India's youngest Olympic champion but the Russian defended well to win comfortably.

Dahiya had lost to Uguev at the 2019 World Championship also.

The wrestler from Nahri village in Haryana had outclassed Colombia's Tigreros Urbano (13-2) in his opener and then outwitted Bulgaria's Georgi Valentinov Vangelov (14-4) in the quarterfinals.

In the semifinals, he erased a massive 2-9 deficit to pin Nurislam Sanayev.

7. Deepak Punia loses to Myles Amine, misses out on bronze 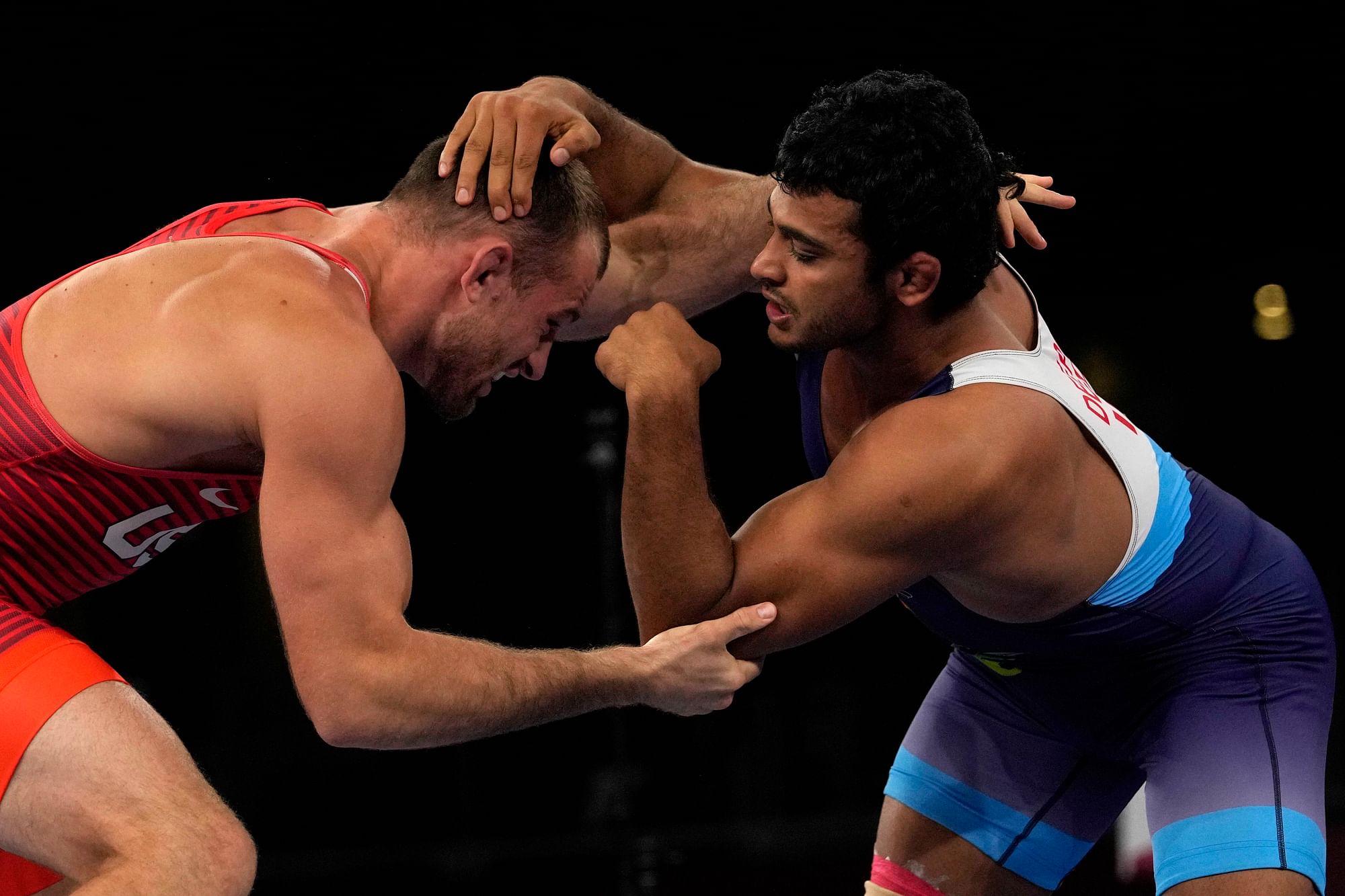 Grappler Deepak Punia was not able to win a bronze medal in the men's freestyle 86kg category at the Tokyo Olympics after suffering a defeat at the hands of Myles Amine of San Marino here at the Makuhari Messe Hall A Mat B on Thursday. Punia suffered a 2-4 defeat on the basis of points in the bronze medal match.

In the first period, Punia went on to take an early 2-0 lead and the pressure was on his opponent. In the same period, Amine scored one more point to bring the scoreline to 2-1 and a crucial three minutes were in store.

However, Punia lost control in the dying minutes of the game and he had to come back empty handed.