The Nationals are due to be held from September 15 in Bellary, Karnataka. The Boxing Federation of India has stated that only the gold-winners from the national championships will make the squad for the world event scheduled to start on October 26 in Belgrade, Serbia.
PTI 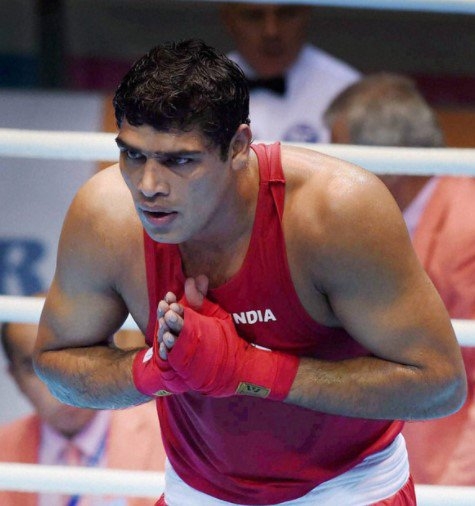 New Delhi: The upcoming national men's boxing championship is unlikely to feature any of the five pugilists who competed at the Tokyo Olympics, ruling them out of contention for next month's world championships in Serbia as well.

Amit Panghal (52kg), Manish Kaushik (63kg), Vikas Krishan (69kg), Ashish Chaudhary (75kg) and Satish Kumar (+91kg) had competed at the Tokyo Games. All of them lost in the preliminary rounds barring Satish, who went down in the quarters.

Of these, Vikas, Satish and Ashish are nursing injuries and have withdrawn. There is no word yet on what Amit and Manish would do but a source said they might also skip the tournament due to "lack of practice time".

"They have opted out of the Nationals because they haven't been able to train well since coming back from Tokyo. One or two might still consider it closer to the tournament but in all likelihood, they wouldn't compete," a source close to the boxers told PTI.

The Nationals are due to be held from September 15 in Bellary, Karnataka. The Boxing Federation of India has stated that only the gold-winners from the national championships will make the squad for the world event scheduled to start on October 26 in Belgrade, Serbia.

Vikas is already out of contention because of a shoulder injury that he sustained during the Olympics. He underwent a surgery last month to fix the major breakdown and it would keep him away from the ring till November.

Satish too has withdrawn after the cut he sustained above his eye during the Olympics caused an infection.

"There was severe swelling because of that infection and I have only recently started recovering from it. I have started light training but it wouldn't be enough for the Nationals," Satish said. Ashish, on the other hand, is recuperating from a wrist injury.

"The problem is in both my wrists and doctors have recommended rest for the time being," he said when contacted. The source said the boxers would have preferred the Nationals to happen after the world championships.

"The boxers would have preferred the Nationals to be held after the world championships. There could simply have been trials for the worlds. So many boxers feel that they are struggling to be in their preferred weight because of lack of training and the little time in hand," he said.

"Only Haryana, I think, has managed to conduct state championships, rest are doing trials to pick teams for the Nationals," he added.