And It's A Wide!: Ajaz Patel and the brain drain in cricket

Ajaz Patel with his 10-wickets haul bowling out the entire Indian team has turned the conversation to another type of brain-drain: the one in cricket! Indian-born players playing for their adopted countries, and now crossing swords with their own desi brethren.
Dr. Sandeep Goyal 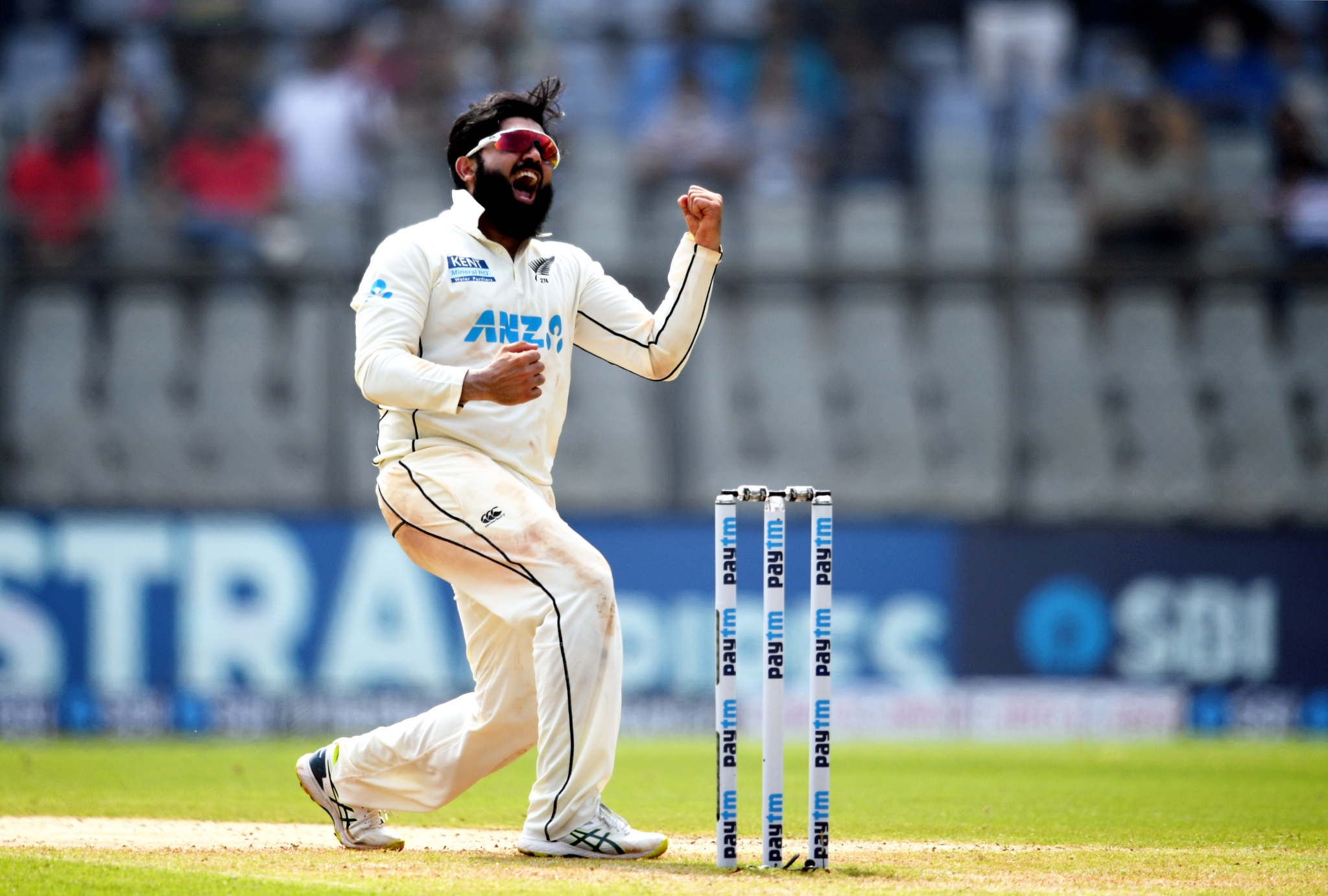 Indians have been making global headlines in tech, digital, finance and business for quite some time now. The likes of Satya Nadella, Sundar Pichai, Ajay Banga, Indra Nooyi, and last week the newly appointed Twitter chief Parag Agrawal have all been shining stars of global business. All Indian born, conquering the world. While there has always been awe and pride surrounding their achievements and success, there has also been a muted and somewhat hushed conversation about the brain drain from our IITs and even our IIMs.

However, today, Ajaz Patel with his 10-wickets haul bowling out the entire Indian team has turned the conversation to another type of brain-drain: the one in cricket! Indian-born players playing for their adopted countries, and now crossing swords with their own desi brethren.

Ajaz Patel was born in Mumbai but moved to New Zealand in 1996, when he was eight-years old. His father apparently worked in the refrigeration business, while his mother was a schoolteacher. The family has its roots in the Tankaria village in the Bharuch district. While in Mumbai, Ajaz lived and studied in the Jogeshwari area. Many of his extended family were at Wankhede today cheering for their firang cousin from New Zealand as he single-handedly routed the Indian Eleven, including getting Virat Kohli out for a duck.

It wasn’t until he was in his twenties that Ajaz realised he needed to make a change from being a fast bowler. “Being 5 foot 6 wasn't quite going to cut it at the next level,” he is known to have told himself. Starting with spin in a club game, he realised it might even be fun to bowl spin and the rest, as they say turned out to be history. On October 31, 2018 - at the age of 30 - Ajaz opened the bowling for New Zealand in a T20I against Pakistan. Exactly like his coach Dipak Patel did in the 1992 World Cup. Clearly, it was desi kismet waking up in videshi lands.

Ajaz’s ascendancy to international cricket was built on repeated success at domestic levels. He was the highest wicket-taker in first-class cricket for three years running in his new homeland New Zealand, before he got the call to do national duty in July 2018. In fact, he had played an immense part in Central Stags winning the domestic cricket title that year with 48 wickets at 21.52. For the record, Ajaz became the fifth Indian-origin cricketer to play for New Zealand since Ted Badcock, Tom Puna, Ish Sodhi and his own buddy from school Jeet Raval. Rachin Ravindra who is also today playing in the New Zealand team, was born in Wellington to Indian parents, and hence is a New Zealander by birth, is now the sixth.

The 33-year-old left-arm spinner Ajaz, has now played 11 Test matches for New Zealand, in which he has taken 38 wickets in total. He has also played 7 T20I matches for the Kiwis, picking up 7 wickets. But it is his amazing 10-wickets single innings haul yesterday that has catapulted him to the Greatest of All Times (GOAT) category, joining England off-spinner Jim Laker (in 1956 against Australia) and India leg-spinner Anil Kumble (in 1999 against Pakistan).

I met Simi in Dublin a few years ago when India was touring there. I was staying at the teams’ hotel and Simi and I would chat most days over breakfast. Being a Mohali boy, born in Bathlana, Punjab, he had a day job and played cricket for fun. But on 16 July 2021, Simi Singh became the first cricketer to score an ODI century batting at No. 8, or lower. So the part-time cricketer tag may actually be unfair. Simi is a world-class cricketer. Would he have made the Indian team if he continued to live in India, I asked him one morning over omelets and toast? No, he said honestly.

“The competition in India is far too much. Getting to make the eleven in India needs superlative talent. I am good but perhaps not that good”, he conceded. But are they fair in selection in countries like Ireland, I asked. He shrugged. “Here everyone plays for the love of the game. There is no money to be made. So the process is by-and-large fair and tension-free”.

The Aussies earlier this year included 19-year-old Tanveer Sangha of Indian origin in the national squad. The cricketer entered the record books as he became only the fourth cricketer of Indian origin to represent Australia. Lisa Sthalekar has been a sensation in women’s cricket in Australia. Arjun Nair, Jason Jaskirat Singh Sanga and Gurinder Singh Sandhu have also earned their spurs for Australia.

Stuart Clark, the former Australian bowler was born to Anglo-Indian parents. Clark's father Bruce Clark hailed from Chennai while his mother Mary was from the Kolar. He played 24 Tests and 39 ODIs for Australia taking 94 and 53 wickets, respectively. Nasser Hussain, the former England captain was born in Madras (now, Chennai) to Raza Jawad ‘Joe’ Hussain, a Tamil-speaking Muslim who was also a cricketer and field hockey player. Hussain is also the descendant of Muhammad Ali Khan Wallajah who was the Nawab of Arcot State in the 18th century. Hussain played 96 Tests scoring 5,764 runs with 14 hundreds and 34 fifties. He also played 88 ODIs with 2,332 runs with one hundred and 16 fifties.

Hashim Amla, the former South African batsman belongs to a Gujarati Muslim family who is of Indian origin and come from a middle-class background. Amla has been one of the most successful cricketers to ever play ODIs and hold records for the quickest to reach 2,000, 3,000, 4,000, 5,000, 6,000, and 7,000 ODI runs and he has hit 10 ODI centuries. Amla played 124 Tests and scored 9,282 runs with 28 tons (including a triple hundred) and 41 fifties. In 181 ODIs, Amla scored 8,113 runs with 27 hundreds and 39 fifties with an average touching 50. Ish Sodhi, the New Zealand spinner was born in Ludhiana, Punjab.

At the age of four, Sodhi moved to Auckland, New Zealand along with his family. Sodhi has played 17 Tests taking 41 wickets and 33 ODIs with 43 wickets to his name. Ravi Bopara, the England star all-rounder was born into a Sikh family of Indian origin. Bopara was born in London and played 120 ODIs scoring 2,695 runs and scalped 40 wickets. He also played 13 Tests with 575 runs and bagged a solitary wicket. Jeetan Patel, the former Kiwi bowler's family belongs to the city of Navsari in Gujarat, however, he was born in Wellington.

He played 24 Tests and 43 ODI matches for New Zealand taking 65 wickets and 49 wickets. Rohan Kanhai, a former West Indies cricketer was born in Guyana but has his family origins from India. Kanhai played in 79 Test matches and scored 6,227 runs with 15 centuries and 28 fifties. Ashish Bagai, a former Canadian wicket-keeper batsman was born in Delhi and studied at St. Columba's School before he moved to Canada with his family at age 11. Bagai played 59 ODI matches scoring 1,922 runs including 2 centuries and 16 fifties along with 50 catches and nine stumpings.

Asif Karim of Kenya, an all-rounder was born in Kenya, though he was of Indian ancestry. Karim played 34 ODI matches for Kenya and scored 228 runs and took 27 wickets. He also holds the unique feat of captaining his country in cricket as well as in tennis.

Would India not have been a better team with all these players who now play for rival countries playing for the Men In Blue? The fact is that it is fairly likely that in the melee of talent in India, many not even have got discovered. At least for those that have been born here and migrated, the move overseas may actually have been a boon.

Competition in any other country is far lower. The fact also is that one cannot deny these Indian origin players their due: despite being born in those countries, it must have been difficult to fight discrimination based on colour and country of origin. I suppose, as a country, we have to just tell ourselves: you win some; you lose some!!!