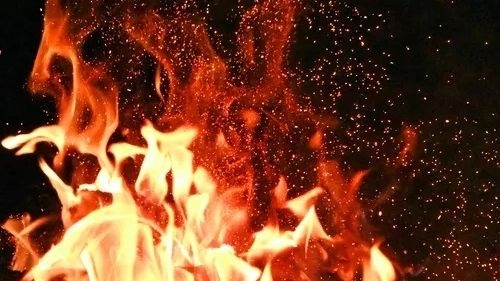 Around 40 godowns of wooden furniture were gutted in a major fire that broke out in a wholesale market selling these items at Bhiwandi in Maharashtra's Thane district, a civic official said on Saturday.

Nobody was injured in the blaze that started around 11 pm on Friday at the Mahalaxmi Furniture market located near Kasheli toll plaza, he said.

"The fire broke out at one of the furniture godowns, which quickly spread to the adjoining storerooms. Around 40 of these units were completely destroyed in the incident," chief of Thane Municipal Corporation's Regional Disaster Management Cell (RDMC) Santosh Kadam said.

On being informed, the fire brigade personnel from Thane and Bhiwandi, a team of the RDMC and fire engines rushed to the place, he said.

"The fire was brought under control by 4.45 am today," Kadam said, adding that the cause of the fire was being probed.

#WATCH | Maharashtra: Fire breaks out at a furniture godown in Kasheli locality of Bhiwandi, Thane.

One fire engine has been pressed into action. No casualties have been reported. The firefighting operation is underway. pic.twitter.com/hZOFdNig6P

Mumbai: One more leopard trapped, but the wrong one again
Advertisement