To boost ties, INS Tarkash is at St Petersburg, Russia

The ship was welcomed into harbour by officials from the Russian Navy with a live performance by the Russian Naval Band as a part of the Welcome Ceremony.
Staff Reporter 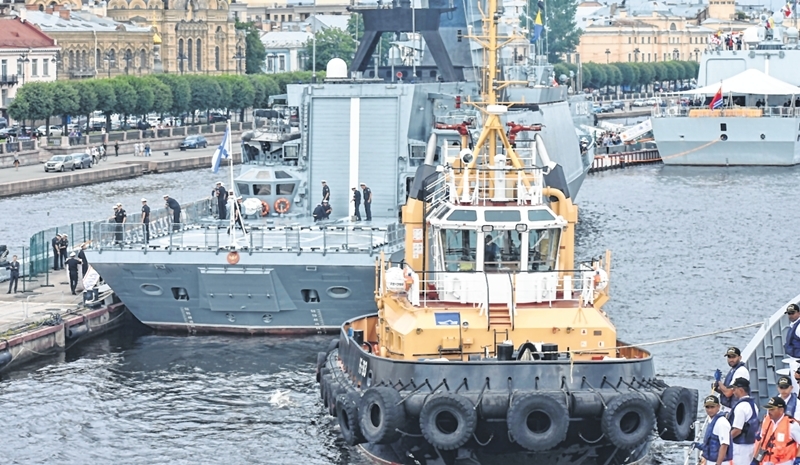 Mumbai: Towards bolstering the robust ties between Russia and India and in recognition of the “Special and Privileged Strategic Partnership”; between the two countries, Indian Naval Ship Tarkash arrived at St. Petersburg, Russia on Thursday, on July 25 to participate in The Russian Navy Day Parade.

The ship was welcomed into harbour by officials from the Russian Navy with a live performance by the Russian Naval Band as a part of the Welcome Ceremony.

In addition to attending the Navy Day Parade, the Flag Officer would also call on the Commander-in-Chief of the Russian Navy to review Navy to Navy cooperation and explore new avenues for collaboration.

INS Tarkash will form part of the mobile column for the review by the President of the Russian Federation. During its stay in harbour, the ship will be berthed at Lt Schmidt Embankment and remain open for visitors on July 26 and 27.

The ships crew would also have professional interactions with the Russian Navy towards enhancing co-operation between the two forces. INS Tarkash, commanded by Captain Sathish Vasudev, is the second ship of the state-of-the-art Teg Class Stealth Frigates (P1135.6), built by Yantar Shipyard at Kaliningrad, Russia.

It is equipped with a versatile range of weapons and sensors and manned by a highly motivated crew of over 250 personnel including 30 officers.