When they were asked to pay a bill they started arguing. The youngsters claimed themselves to be a goon of local gangster Sandeep Mane.
Faisal Tandel Four youngsters argued in a restaurant as they did not want to pay the bill claiming that they work for local goon. The goon Sandeep Mane threatened the hotelier and demanded a monthly extortion of Rs 20,000. When hoteliers filed a complaint, Mane along with the assailants entered the restaurants and assaulted and molested their staff.

The police said that the complainant was identified as Istiyak Shaikh, 27, a resident of Wagle estate in Thane. Shaikh in his statement said that he is an hotelier at hotel Hangout cafe restaurant in Kothari compound of Manpada in Thane. The restaurant is in partnership with Aftab Shaikh and Sohel Habib and has 20 employees. Istiyak in his statement to police said on January 9, at 6 pm four people from Krishna nagar area came to have food.

When they were asked to pay a bill they started arguing. The youngsters claimed themselves to be a goon of local gangster Sandeep Mane. They threatened Isitiyag, whether he wants to keep the hotel open or shut it down. These boys left without paying the bill and returned back at 8:30pm and pelted stones on the hotel and ran away," added Istiyak in his statement to police.

Istiyak was about to go to the police station, when Sandeep Mane met him and threatened not to register a complaint. "Mane further said if they want to run the hotel smoothly then he has to pay an extortion of Rs 20,000 monthly," said a police officer.

Istiyak further filed a non-cognizable case for his safety against the four youths. On January 10, after closing the hotel at 10pm. Sandip Mane along with a few men's claimed to be reporters and two women entered the hotel and started banging the shutter. "They then entered the hotel from the back gate. They molested a female staff member and assaulted three other staff members. The hotelier contacted the police who reached the spot to move Mane and others out," said a police officer. 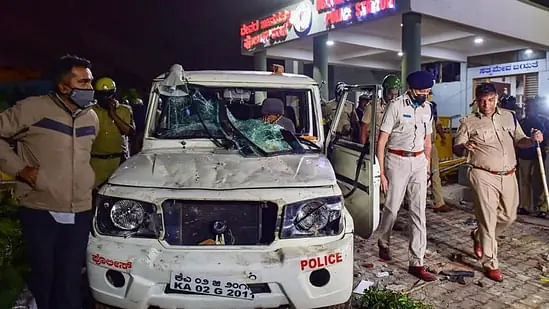 Demonstrators pelt stones at police as border dispute between Maharashtra and Karnataka turns...