The ED had arrested Raut on August 1 this year in a money laundering case connected to Goregaon’s Patra Chawl redevelopment project. He is presently in judicial custody in Arthur Road prison.

His co-accused Pravin Raut, who the agency alleged is his front man in the offence, was also granted bail. Additional Solicitor General Anil Singh appearing for the ED immediately thereafter sought to defer the order from taking effect until Friday, though in their plea they sought time until Nov 16. He told the court that they require breathing time to consider the order and prepare grounds to challenge it before a higher court.

The defence opposed such a plea and said that a sessions court does not have the power to stay such an order. Senior Counsel Abad Ponda appearing for Pravin Raut argued that it is a matter of personal liberty and such relief is neither morally nor legally tenable. The court is to decide on the plea of the ED at 3 pm.

The case concerns alleged siphoning of money in the Patra Chawl redevelopment project in Goregaon to the tune of over Rs. 1039 crores. Accused in the case are Rakesh Wadhawan, Sarang Wadhawan and Pravin Raut - all directors of Guru Ashish Constructions Pvt. Ltd., that was in charge of the project.

Raut was arrested in PMLA Case

The ED had arrested Raut on August 1 this year in a money laundering case connected to Goregaon’s Patra Chawl redevelopment project. He is presently in judicial custody in Arthur Road prison.

ED alleged that he had received Rs1.06 crore from his co-accused Pravin Raut. The amount it alleges is a part of the ‘proceeds of crime’ (POC) of Rs112 crore that Pravin Raut received from the illegal sale of Floor Space Index (FSI) in the project. Pravin Raut was one of the directors of the firm that had taken up the project that never saw the light of day. Raut said he is the “victim of political change of power”

Raut said he is only the “victim of political change of power” and thereby “abuse of criminal machinery” at the hands of the ruling party.

The investigating agency had opposed the bail plea contending that the case was not registered “out of malice or vendetta” and that he is fully involved in the offence of money laundering.

The scam pertains to alleged financial irregularities in the redevelopment of the Patra Chawl and related financial transactions involving Raut, his wife and associates. Patra Chawl is spread over 47 acres and houses 672 tenant families. 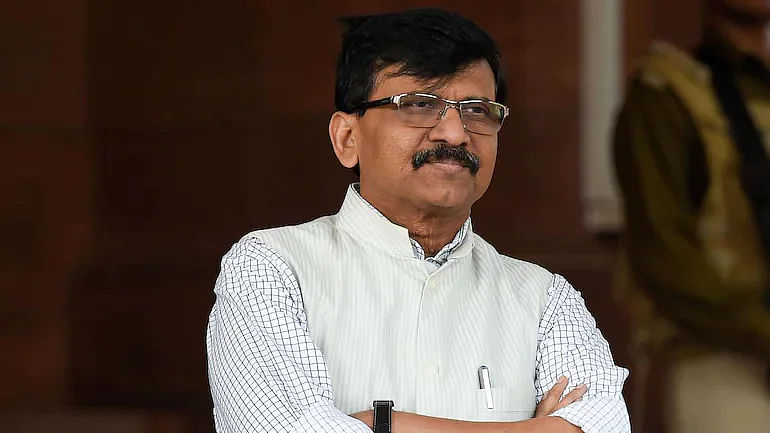 Out of 672 flats, tenants yet to get a single flat in last 14 years

In 2008, the Maharashtra Housing and Area Development Authority (MHADA), a government agency, assigned a redevelopment contract for the Chawl to Guru Ashish Construction Private Limited (GACPL), a sister company of the Housing Development and Infrastructure Ltd (HDIL). The GACPL was supposed to build 672 flats for the tenants and also give some flats to MHADA. It was free to sell the remaining land to private developers.

But the tenants did not get a single flat in the last 14 years as the company did not redevelop the Patra Chawl and sold land parcels and FSI to other builders for Rs1,034 crore, as per the ED.

ED’s allegations against Pravin Raut are of laundering Rs 112 crore, while Sanjay Raut had allegedly received over Rs 3 crore.