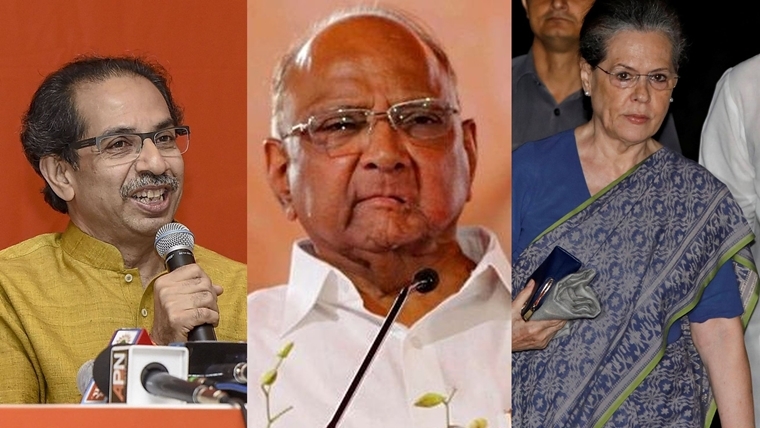 President's rule was imposed in Maharashtra on Tuesday evening after Governor Bhagat Singh Koshyari in a report to the Centre stated that formation of a stable government was impossible in the current situation despite all his efforts, drawing flak from non-BJP parties.

The development came as the political impasse lingered on for the 19th day after the assembly election results were declared, with the Congress and the NCP saying that they have not yet taken any decision on Shiv Sena's proposal of forming a government, which they received only on Monday, and will hold further discussions.

At a joint press conference in Mumbai with Congress leaders deputed by Sonia Gandhi to hold talks with him, NCP president Sharad Pawar said the two parties will discuss and evolve a consensus on what should be the policies and programmes if the Shiv Sena was to be supported.

Congress leader Ahmed Patel insisted no final decision can be taken without formulation of a common minimum programme by the three parties. He also condemned the imposition of President's rule and said the Congress was not given an opportunity to form government.

Earlier in the day, the Union Cabinet chaired by Prime Minister Narendra Modi considered the report of the Governor to the President that was submitted at noon. Indira, Modi or Nehru – which PM's tenure saw most instances of President's rule?

The Cabinet recommended that the President issue a Proclamation under Article 356(1) of the Constitution imposing President's rule in Maharashtra and keep the state legislative assembly under suspended animation.

"President Ram Nath Kovind has signed the proclamation," an official said. In his report, the governor said that a situation has arisen in the state "in which it is impossible to constitute and/or form a stable Government in the state", officials said . The governor noted that he made attempts to explore the possibility of formation of government by having appropriate communications with all political parties which could have formed the government in alliance with other political parties, but they have not succeeded.

"He is satisfied that the government cannot be carried on in accordance with the Constitution, (and therefore) has today submitted a report as contemplated by provision of Article 356 of the Constitution," said a tweet from the governor's office.

After the BJP declined to form the government and the Shiv Sena failed to get letters of support from the NCP and the Congress, Koshyari had on Monday night asked the Sharad Pawar-led NCP to express its "ability and willingness" to stake claim to form government in the state by 8.30 pm on Tuesday.

However, the Governor, is his report, noted that the NCP on Tuesday morning conveyed to him that the party needed three more days to gather requisite support. The governor felt that as already 15 days had passed, he was not in a position to give more time, the officials said.

President's Rule can be revoked before the six-month period if a situation emerges for formation of a stable government, the officials said.

In the assembly polls held last month, the BJP won 105 seats, followed by the Shiv Sena (56), the NCP (54) and the Congress (48) in the 288-member House. Despite their alliance getting a majority, the BJP and the Shiv Sen parted ways following disagreement over powersharing with the Sena insisting on the chief minister's post.

An angry Shiv Sena, which was trying to cobble together a non-BJP government with support from the NCP and the Congress, moved the Supreme Court challenging the governor's decision on Monday to not grant it the three days to submit the letter of support for government formation in the state, but failed to get an urgent hearing.

"The Supreme Court has asked us to mention the writ petition at 10.30 am on Wednesday before the court," Advocate Sunil Fernandes, who filed the petition on behalf of the Shiv Sena, told PTI.

He said a second petition challenging the imposition of President's rule in the state is being readied. "The decision on when to file it (fresh petition) will be taken tomorrow," he said.

In its petition, the party termed the governor's decision "unconstitutional, unreasonable, discriminatory, capricious and mala fide".

The Congress was scathing too with its chief spokesperson Randeep Surjewala hitting out at the governor and the BJP-led Centre saying they had not only played a "cruel joke" on democracy, but had also trampled upon constitutional practices with their actions.

He also questioned the Maharashtra governor for the "arbitrary" allotment of time to the NCP, Shiv Sena and the BJP to prove support for government formation.

"The governor and rulers in Delhi have done a grave injustice to the afflicted farmers and the common people of Maharashtra," he said "This is unashamedly dishonest & politically motivated," Surjewala said on the governor's report.

The Shiv Sena had suffered a setback in its efforts to form a non-BJP government in Maharashtra on Monday with the Congress at the last moment announcing its decision to hold more talks with ally NCP on supporting the Uddhav Thackeray-led party.

Congress' Kapil Sibal, who will represent the Shiv Sena in the apex court, told reporters that the Maharashtra governor is working on the directions of the BJP-led central government and alleged that President's rule has been imposed to facilitate horse-trading.

"That is the whole purpose of the exercise. Allow President's rule, give sufficient time to yourself and then use money power, get others legislators on board. This is misuse of authority and highly immoral," he said.

Shiv Sena President Uddhav Thackeray said that the Bharatiya Janata Party is still contacting him through unofficial channels to join hands to form the government in Maharashtra.

"They keep making vague and differing offers each time. But we have decided to go with the Congress-Nationalist Congress Party," Thackeray declared.