Ramseth Thakur, a former MLC and senior member of APAC said that the agitation was 100 per cent successful as villagers visited the ongoing airport site and there was no work going on.

More than 10,000 villagers from 27 villages assembled at the Navi Mumbai airport site near Dapoli village in Panvel amidst tight police security for a symbolic work-stopping agitation on Monday. Representatives of the All-Party Action Committee (APAC) claimed that the agitation was successful as the ongoing airport works were completely held on.

The APAC representatives gave a one-month ultimatum to address their demand else, they would launch the agitation again wherein more than one lakh villagers will hit the road.

Last week, the talks between the City and Industrial Development Corporation (CIDCO) and the APAC over the naming of the proposed Navi Mumbai International Airport (NMIA) after late socialist D B Patil was failed.

The meeting was arranged by the police to postpone the agitation due to the rising number of Covid cases in the state. However, villagers from 27 affected villages went ahead with a symbolic work stoppage agitation at the ongoing airport work site in Panvel on January 24.

Ramseth Thakur, a former MLC and senior member of APAC said that the agitation was 100 per cent successful as villagers visited the ongoing airport site and there was no work going on.

“We were assured by the police that the work had been stopped on Monday, but we checked it personally,” said Thakur, adding that they would hit the road again as they would not compromise with their demand.

Dashrath Bhagat, another PAP leader scratched his hand with a pen and showed blood during the agitation to show his solidarity with the demand to name the airport to be after late socialist D B Patil.

While talking to the media, Shivraj Patil, deputy commissioner of police of Zone 2 said that the police had invited representatives of PAPs villagers to postpone the agitation amid the rising number of Covid cases. But they continued with the protest.

“The Covid protocols have been violated and action will be taken against violators as per the law,” said Patil.

In order to avoid any untoward situation due to the assembly of a large number of villagers, more than 1,200 personnel were deputed at the agitation site. 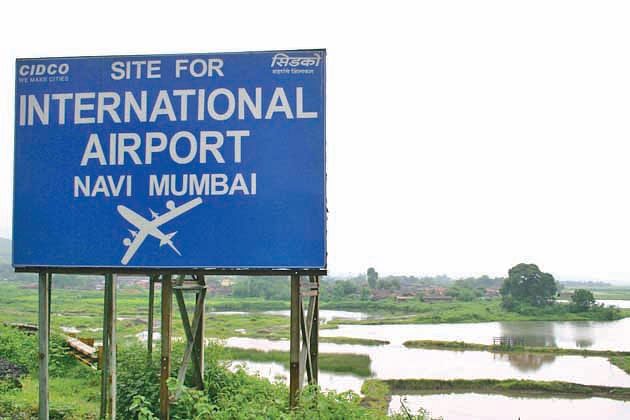