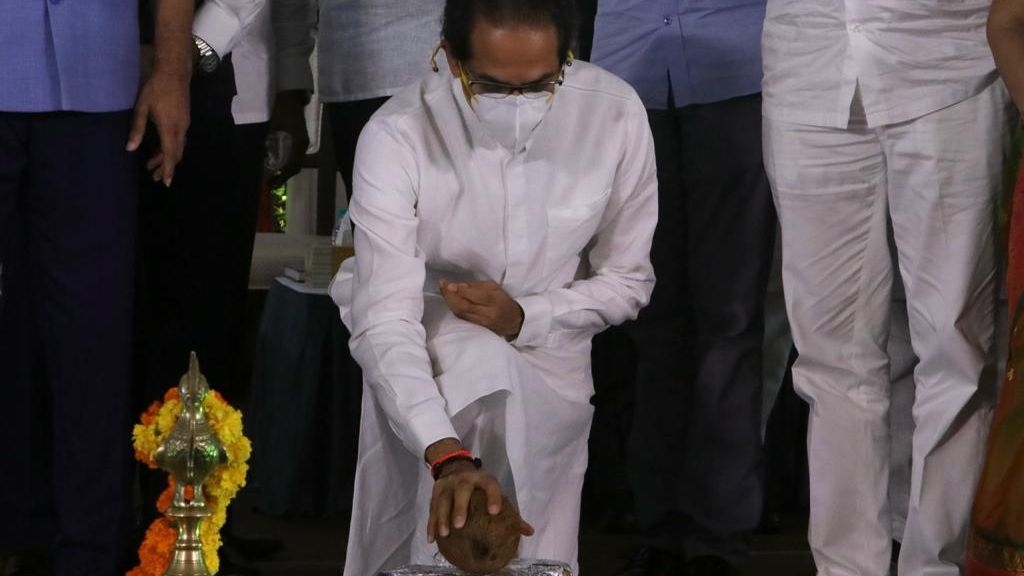 The ugly duckling of Mumbai's underbelly -- century-old clusters of BDD Chawls -- where Mahatma Gandhi spent a night among the 'Mehtar Samaj - (Sweepers) 84-years ago -- is all set to don a new 'avatar' with Asia's biggest redevelopment finally kicking off, officials said.

The first bulldozers started razing the historic but crumbling eyesores, built (1921-1924) by the erstwhile 'British Development Department' (BDD), conceptualized by the then Governor of Bombay, Sir George Lloyd, for middle-class mass-housing - identical, matchbox structures, similar to those built by erstwhile Communist countries.

Each of the 17,000 families, mostly mill-workers, eked out a miserable existence -- some cramped as many as 15-20 people per tenement in the ground-plus-3-storied buildings with 20 chawls on each floor.

Over the next few years, they will move to some 32 swank towers in 500-sq.feet 2-BHK ultra-modern flats with top amenities, bringing a sea-change to their lives.

Ex-Shiv Sena legislator Sunil Shinde, who spent years on the project groundwork, said it will be supervised by Maharashtra Housing & Area Development Authority (MHADA), and shall be completed in 8 years, and the first phase expected to be ready within 3 years.

"It is because of the determined vision of CM Uddhav-saheb and Minister Aditya-ji Thackeray, ensuring the project took off in 20 months since they assumed office," Shinde told IANS.

"However, we want the government to reduce the construction time, give a corpus fund of Rs.10-Lakhs, one parking for each flat and hike the area for the 300-odd commercial premises from 200 sq.feet to 300 sq. feet," Mane said.

Shinde pointed out that the scheme has been so well-conceived that each family living here, including around 1,800 police personnel, shall shift to transit quarters along with an agreement of flat allotment in the new towers - guaranteeing that all those who leave the BDD Chawls, will get a flat as per the construction plans.

As they await a bright future, many old-timers now reminisce of the generations spent in their 'chaali' (chawl) system, considered a form of housing unique to Mumbai - where one building will be preserved for posterity.

"The rooms were tiny, but people were large-hearted. Our life was unique, lot of camaraderie punctuated with brawls, sharing all joys and sorrows, births or deaths, celebrating festivals of all religions together, whether Diwali, Eid or Christmas," said a longtime resident Dhonduram Baikar, 85.

Another local, Mangesh Sawant recalled how people hailing from different villages, would name their homes or the buildings after their native place.

There were many poor folks who celebrated Ganeshotsav, Satyanarayan Pooja, or fullfledged weddings in the common passages decorated for the occasion, where even the uninvited neigbours dropped in to bless the couple!

"The chawls bustled with kids running around, teens studying or quarreling, loafers loafing around, and occasionally Cupid struck several young boys and girls who ended up with marital bliss," chuckled 85-year-old Neelam Joshi, who had a 'love-marriage' 55 years ago with a boy Manohar Joshi, from the next building.

In 1937, there was a huge flurry of activity when the Father of the Nation, Mahatma Gandhi arrived here and spent a night with the sweepers' community here.

The Chief Architect of Indian Constitution Bharat Ratna Dr. B. R. Ambedkar was a regular visitor to BDD Chawls and had planted a 'Peepal' sapling which has now bloomed into a gigantic shady tree, said Mane.

Months before his assassination (May 1991), the former PM and Bharat Ratna Rajiv Gandhi - then the Leader of Oppositon - was delayed for a rally in the Gandhi Maidan, but finally turned up the next morning around 3.30 a.m., but the venue was full of enthusiastic though groggy-eyed people still waiting to hear him out!

Mane revealed how, at Worli BDD Nos. 89 to 92, inhabitated by many Indian Railway employees, a train engine used to chug upto the buildings adjacent to the railway lines, pick up the staffers in the morning and drop them back in the evening!

A popular shooting locale for Bollywood and Marathi films and even tele-serials, there are two dedicated "BDD Chawl sets" in Raigad and Thane, and the chawl culture has been immortalized in many many essays, documentaries, Marathi, Hindi and English books.