Mumbai's autos have a field day in city after Unlock 4.0 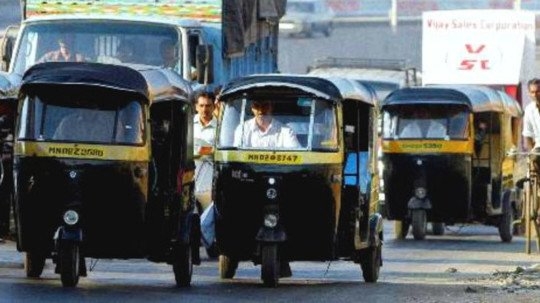 Mumbai: The suspension of the Mumbai locals, might be a bane for most Mumbaikars but it has turned out to be an absolute boon for auto-rickshaw drivers. While more and more people are coming out after 'Unlock 4.0' there's not enough public transport services available.

Those living in the suburbs are now heavily dependent on autos for which auto drivers are able to generate a better revenue as Mumbaikars have started to make deals with auto rickshaw owners who ferry them to their workplace regularly.

"I have two clients who go to their office at Andheri East and Goregaon Nesco grounds twice and thrice a week from Kandivali. I provide them pick-up and drop. It helps me earn a few extra bucks," said Deepak Kumar (32) an auto rickshaw driver.

"Getting inside a BEST bus is a task and travelling in cabs or four-wheelers is expensive, hence auto rickshaw is the best way. I travel every Monday Wednesday and Friday while the other customer travels on Tuesday and Thursday. Hence, distance is also maintained," said Akash Punamiya, Kumar's client who traveled to Andheri east.

The state government has allowed a maximum of two passengers in an auto. Many passengers are finding autos to be a safer option. "As trains are shut, we can travel throughout the suburbs easily via auto rickshaws. It is expensive, but at the same time it's cheaper than taxis and private vehicles," said Anita Doshi, a private firm executive, who resumed office from September 1.

"Our union has told us to sanitise the vehicles regularly. We provide passengers with sanitisers and have installed aluminium sheets. Passengers feel safer to travel in autos now," said Omar Ali, an auto rickshaw owner.

Meanwhile, sharing auto services are not functional which is giving auto drivers more time to ply on longer routes.

"Earlier most of my trips would include shorter routes within 4 km, now three-four trips range between 8-12 km daily," said Amir Siddique, an auto driver.

"The BEST buses get overcrowded in peak hours and there's no local trains, so people are opting for rickshaws" said Manoj Kamble, general secretary of independent Auto Rickshaw outfit, Goregaon.

Chief of Mumbai Rickshawmen's association, Thampi Qurien said that during the lockdown the earnings of auto drivers were badly hit. “Even on the first few phases of unlocking, people were not coming out. But now people have started to step out and they are dependent on rickshaws," Kurien said. He added that when locals resume, auto drivers may not get such high paying fares on longer routes. “By that time, shared auto services will be back. It will serve the purpose," he said.