HomeMumbaiMumbai's AQI up in the air; fluctuates between ‘poor’ and ‘moderate’

Mumbai's AQI up in the air; fluctuates between ‘poor’ and ‘moderate’

Mumbai's AQI up in the air; fluctuates between ‘poor’ and ‘moderate’ | Pixabay
Follow us on

The air quality of the city has been fluctuating between the ‘poor’ and the ‘moderate’ categories since the retreat of monsoon. According to the System of Air Quality and Weather Forecasting And Research (SAFAR), the overall Air Quality Index (AQI) of Mumbai was recorded at 183 (moderate) on Monday while it had shot up to 253 (poor) on Sunday. However, even on Monday, regions like Andheri, Malad and Navi Mumbai remained in the ‘poor’ category with AQIs of 211, 228 and 300, respectively.

After four months of good air days during the monsoon, the city witnessed a drastic drop in the air quality from the ‘good’ to the ‘very poor’ category post Diwali celebrations. Since then, the city's air quality has been swinging between moderate and poor categories.

This fluctuation is mainly because of the stagnant winds and increase of dryness in the air, explained the SAFAR. The India Meteorological Department has forecast clear skies with the maximum and minimum temperature oscillating between 35 and 22 degrees Celsius for the next two days. AQI of other cities

Meanwhile, Delhi recorded a consistent ‘very poor’ air quality with 254 AQI. Other cities like Pune and Ahmedabad remained in the ‘moderate’ category and recorded AQIs of 147 and 141, respectively. 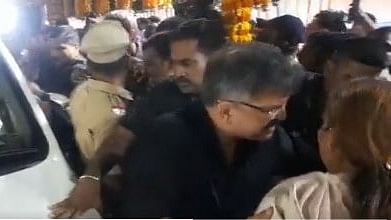