The protest was led by Sena legislators Sada Sarvankar and Manisha Kayande near the statue of the Maratha warrior king at the Shivaji Park in Mumbai.
Sanjay Jog 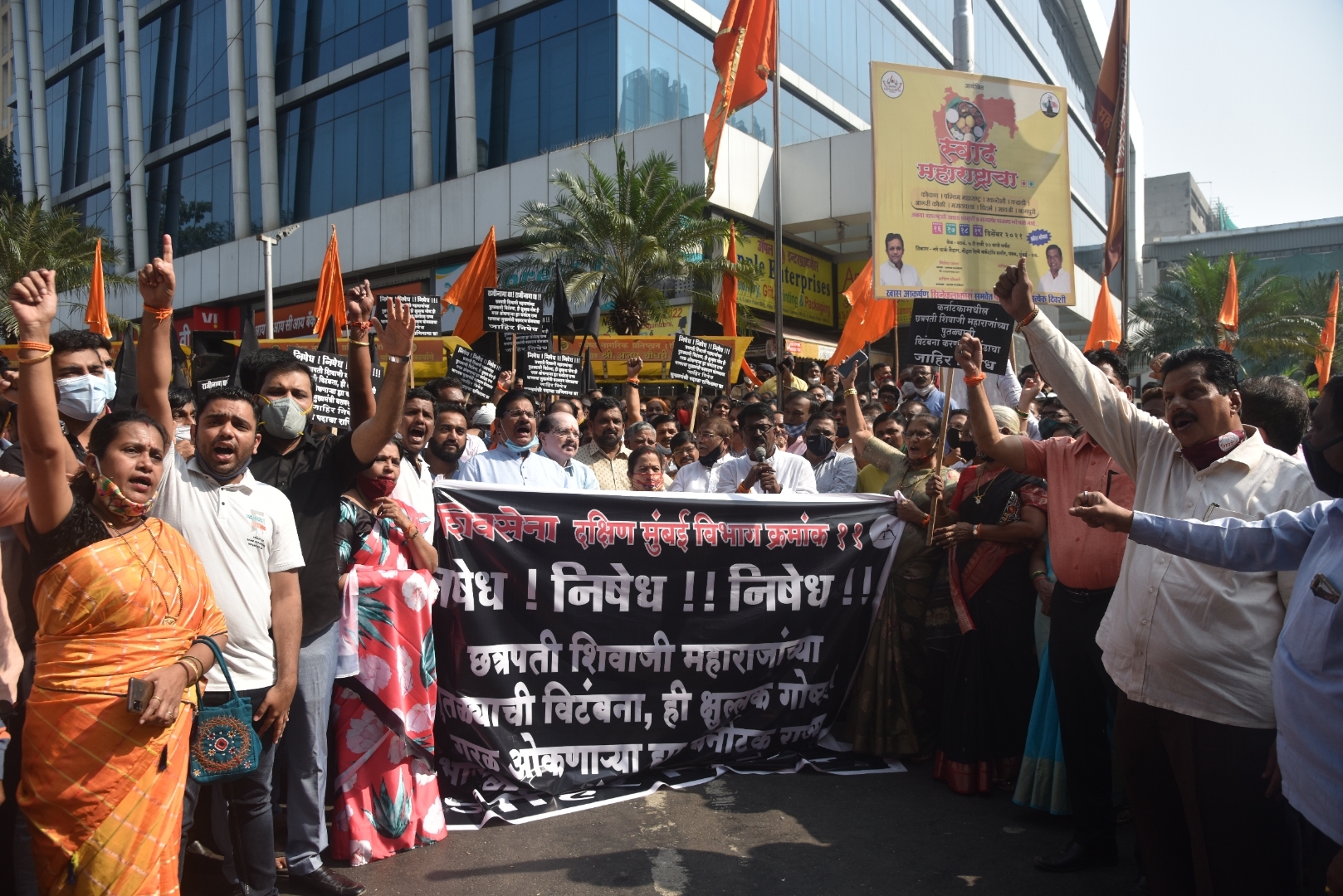 Mumbai: Shiv Sena activists protest against alleged desecration of a statue of Chhatrapati Shivaji Maharaj in Bengaluru, and the Karanataka Chief Minister's `dismissive' remark about the incident, at Lalbaug in Mumbai on Sunday, Dec 19, 2021. | (Photo by Bhushan Koyande)

Desecration of Shivaji Maharaj's statue in Bengaluru gave an opportunity to the Shiv Sena to launch a scathing attack on its erstwhile ally BJP. Shiv Sena staged impromptu protest at the Shivaji Park against the BJP led government in Karnataka and its Chief Minister Basavraj Bommai.

The protest was led by Sena legislators Sada Sarvankar and Manisha Kayande near the statue of the Maratha warrior king at the Shivaji Park in Mumbai. Taking a swipe at the BJP for keeping mumon the issue, Shiv Sena MP Arvind Sawant questioned why they are quiet when they have a habit of writing tweets on every other issue.

“Shiv Sena will not tolerate any insult to Shivaji Maharaj. The party will raise the issue in the Parliament during the ongoing winter session,’’ he said. Kayande said Union Home Minister Amit Shah should ask Bommai to tender an apology.

The Shiv Sainiks beat up an effigy of the Karnataka CM and shouted slogans condemning the alleged incident in the neighbouring state. There was a brief scuffle between the police and the Shiv Sainiks, when the latter were stopped from doing so.

Sarvankar claimed that the BJP seeks votes in the name of Chhatrapati Shivaji Maharaj in Maharashtra and insults the warrior king in Karnataka. Karnataka CM Bommai on Sunday appealed to people to respect iconic personalities and avoid lending ears to rumours. "Our government will not tolerate anyone insulting the patriots and disturbing law and order in the state.

Convey your sentiments peacefully. Whoever they are, we will deal with them with an iron hand," he said. Meanwhile, the NCP workers across the state performed abhishek ritual on Shivaji Maharaj's statue to condemn desecration in Bengaluru.