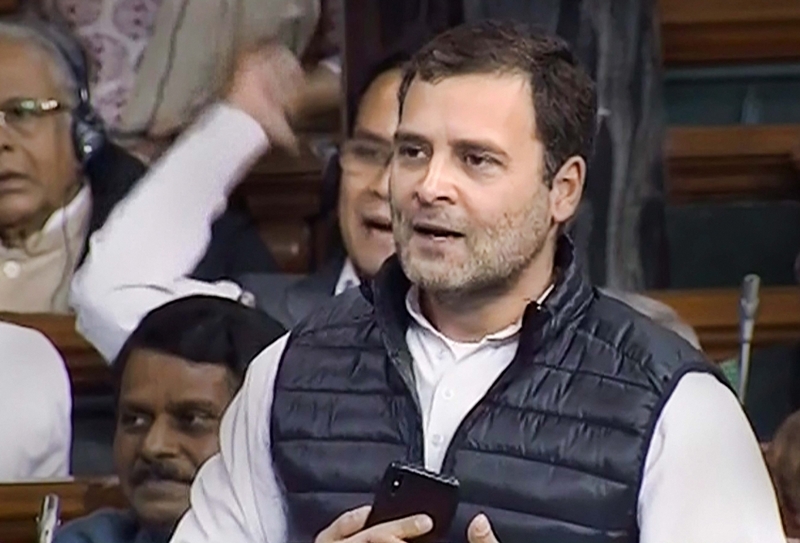 New Delhi: Congress President Rahul Gandhi speaks in the Lok Sabha during the discussion on Rafel issue at Parliament in New Delhi. LSTV grab via PTI |

Mumbai: Amid a row over Rahul Gandhi’s remarks against Defence Minister Nirmala Sitharaman, senior Congress leader Sushilkumar Shinde Thursday defended the party chief saying he always respected women and held them in high regard. Shinde made the comments here in the wake of the National Commission for Women (NCW) issuing a notice to Gandhi over his “extremely misogynistic, offensive and unethical” remarks against Sitharaman.

“He (Gandhi) always respects them…he always speaks highly about women in his rallies and public meeting,” Shinde told reporters here. Speaking at a farmers’ rally in Rajasthan, Gandhi had Wednesday said, “The watchman with a 56-inch chest ran away and told a woman, Sitharaman ji, defend me. I won’t be able to defend myself, defend me”.

The former Union minister also said that the seat-sharing among the Congress, NCP and other like-minded parties to form an alliance against the BJP ahead of the polls would be finalised soon. To a question, Shinde said he was ready to contest the upcoming Lok Sabha polls if his party gave him ticket. “If it doesn’t, I will keep working for the party for life,” he added.