Mumbai: MMRCL to plant over 400 trees on Metro-3 stations 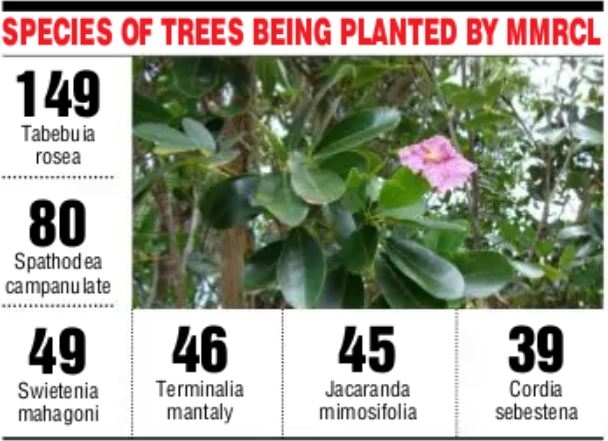 Mumbai will get more trees as the Mumbai Metro Rail Corporation Limited (MMRCL) has started planting them at Metro-3 stations.

It took more than 9 months for the process of transplantation to begin at eight metro stations for which MMRCL was looking for advanced-sized nursery-grown trees.

Since September last year, the MMRCL began scouting for agencies or organisations that will supply, deliver, plant and maintain these advanced sized trees. Earlier this May, they again called tenders for planting them at the same stations and since then, work has begun. There will be 408 trees planted at Metro-3 stations of Mumbai Central, Mahalaxmi, Science Museum, Acharya Atre Chowk, Worli, Siddhivinayak, Dadar, and Shitaladevi.

The officials from MMRCL said that they have begun the process of plantation not just at these metro stations but at other locations as well. The trees include exotic ones as well whose natives are in the United States of America, Central and South America, Caribbean Islands and Africa.

These trees need to be supplied, delivered, planted, and maintained for a period of 4.5 years at a cost of Rs 3.50 crore. Earlier last year, the MMRCL authorities had given a time period of six years for the same process. These trees would be ‘advanced-sized nursery grown’ ones which would ideally be anywhere between 3-5 years old.

“These are the trees that the MMRCL had removed or cut for construction of metro-3 underground stations. They had promised to plant those once work on these metro stations was completed,” said Zoru Bhathena, environmentalist and activist.

Environmentalists claim that exotic trees bear fruits and flowers but could wither and break in Indian conditions. “The MMRC had claimed to have planted thousands of trees that were geo-tagged in the past as well but they showed us the location of barely a couple of hundred,” said Stalin D, director of Vanashakti.

As of today, the MMRCL has completed 53 kms of tunnelling of total 55 kms. For this, 37318 segment rigs were used. The project has made progress at 79 percent and close to 72 per cent of work on the station is being completed.

MMRCL will lay 66.07 km-track for Metro-3 for which work started on March 5. Around 45 per cent work of track welding is complete and till date around 6 kms of track have been laid.