Mumbai: Mega Block on Central and Harbour line during this weekend; know more details over here

In addition to that, CR also decided to take a 5 hours block on Sunday between Matunga and Mulund on the UP and down fast line.

Be aware of Mega Block while making any plans this weekend. The central railway planned three blocks in row, including one hour ten minutes block between Asangaon and Kasara on Saturday afternoon, 1.30 hours block during mid night of Saturday and two blocks on Sunday for the launching of girders on a foot over bridge at Kasara.

In addition to that, CR also decided to take a 5 hours block on Sunday between Matunga and Mulund on the UP and down fast line.

"On Saturday from 2.25 pm to 3.35 pm on the Up line between Asangaon and Kasara traffic block will be taken for launching girders on a foot over bridge at Kasara" , said an official of CR .

Due to this block, local trains for Kasara leaving CSMT at 11.42 am and 12.30 pm will be short terminated at Asangaon and will run as Asangaon-CSMT slow local departing Asangaon at 01.48 pm and 02.50 pm. Apart from that local trains for CSMT leaving Kasara at 02.42 pm and 3.35 pm will remain cancelled.

Similarly suburban services between Asangaon and Kasara will be suspended from 11.55 am to 03.10 pm on Down direction and from 01.30 pm to 04.15 pm on Up direction.

CR will also take another block on Saturday /Sunday midnight from 3.35 am to 4.55 am on the Up and Dn lines between Asangaon and Kasara. Due to this block Up local leaving Kasara at 04.59 am will be rescheduled to leave at 05.15 am.

Apart from partial cancellation of several suburban trains, dozens of long distance trains will also be regulated at various stations.

Block on Up and Dn fast line between Matunga and Mulund

For the maintenance purpose 5 hours ( 11.05 am to 4.05 pm) block will be taken on Sunday between Matunga and Mulund on UP and down fast line. During block, down fast services leaving CSMT from 10.25 am to 3.39 pm will be diverted on down slow line at Matunga and will halt as per their respective schedule halts between Matunga and Mulund stations and will arrive at their destination 15 minutes behind schedule. Fast trains beyond Thane will be re-diverted on Dn fast line at Mulund.

Up fast services leaving Thane from 10.50 am to 3.46 pm will be diverted on Up slow line at Mulund and will halt as per their respective schedule halts between Mulund and Matunga stations and will arrive at the destination 15 minutes behind schedule. Further will be re-diverted on the Up fast line at Matunga.

However, Special services will run between Panvel and Kurla (Platform No.8) during the block period. During block harbour line passengers are permitted to travel via Main Line and Western Railway from 10.00 am to 6.00 pm during block period.

No day block on WR on Sunday 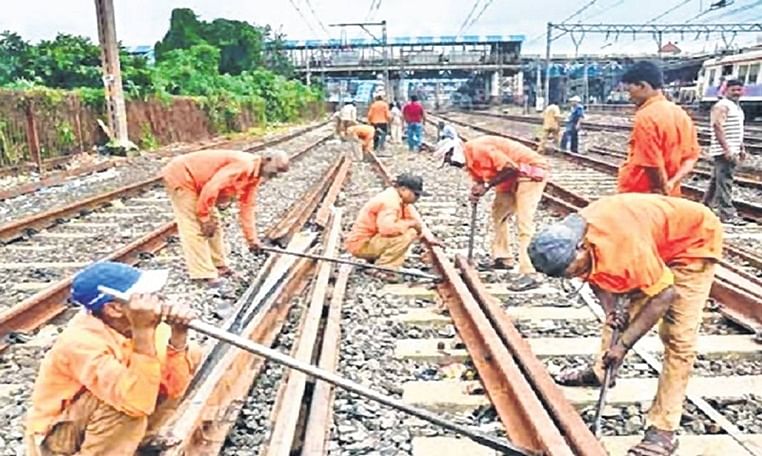