According to the agency sources, the SIT team made inquiries with Sajnani about the product that was sold and about its content.
Somendra Sharma 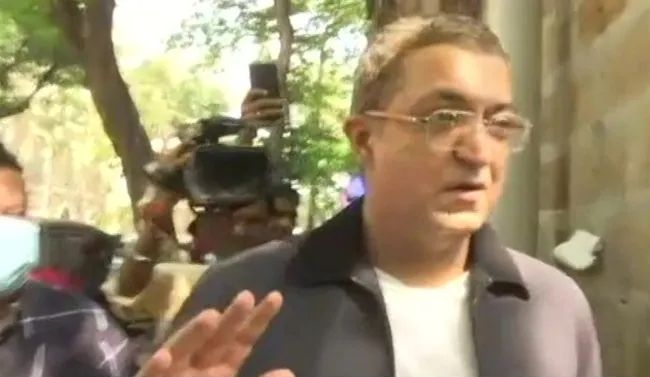 British citizen and businessman Karan Sajnani on Wednesday appeared before the Narcotics Control Bureau's (NCB's) Special Investigation Team (SIT) to get his statement recorded in connection with the drugs case in which he was also an accused along with Sameer Khan and others.

The agency sources said that Sajnani was enquired about his businesses and his explanation on the material that was seized by the NCB in January this year.

The SIT has also sought documents and invoices of the consignment from him. Sajnani categorically denied to the SIT that Sameer Khan was part of his business. Sajnani is into the rolling tobacco and herbal business.

"Whatever that was seized (by NCB) was herbal tobacco and is sold on online websites. One kilogram of marijuana the lab report mentioned is vegetative, which means it is non-functional. I have not done anything wrong. Sameer Khan is not my business partner. I was arrested with him," Karan Sajnani told media persons at the NCB office.

According to the agency sources, the SIT team made inquiries with Sajnani about the product that was sold and about its content.

A statement issued through Sajnani's advocate Sana Khan, stated, "Karan Sajnani was summoned by the NCB on Wednesday. Sajnani says that SIT is a very fair unit, very cooperative, not biased, asked him relevant questions and there was no pressure on making any statements."

The statement added, "They were very keen on understanding the nature of the products seized and very interested to understand how the herbal products were marketed and were interested to know where the packaging material came from. SIT asked Karan whether co-accused Sameer Khan is a part of Karan’s business and Karan has denied it and Karan has been denying it from day one. Karan told the SIT that Sameer Khan has been his friend for 25 years. Karan is happy with the way the investigation was conducted with such professionalism by the SIT. Karan said his full faith is restored towards the NCB because of the new SIT unit."

Meanwhile, the Deputy Director General (NCB's SIT), Sanjay Singh while talking to The Free Press Journal said, "We have made inquiries with Karan Sajnani today with regards to the case in which he was an accused. We will question him further. Witnesses are being called for an inquiry."

When asked about when Aryan Khan would be called for an inquiry, Singh said, "He (Aryan) is a material witness and will be called too."

In January this year, based on specific information, the NCB Mumbai had effected a seizure of Ganja from one courier at Bandra West.

In the follow-up operation, a huge stash of imported strains of Ganja was recovered from the residence of Karan Sajnani at Khar. In the said case, the NCB had arrested Sameer Khan and three other persons under the Narcotic Drugs and Psychotropic Substances (NDPS) Act.

The NCB had claimed in a statement in January, "During the investigation, the role of Sameer Khan, a resident of Bandra also came to light. Sameer Khan was called for examination and after detailed examination, he has been placed under arrest."

In September, Khan and Sajnani had got bail from a special NDPS Act court.