A celebration meet, including prayers and feast, was held at the community's Marine Lines centre. Numbered approximately 500 in Mumbai, the community is outcast in some places of the world.

Mumbai: The Baha'i people on Tuesday began two-day celebrations for 'Twin Holy Days' which starts with the birth anniversaries of community founders Bab and Baha'u'llah.

A celebration meet, including prayers and feast, was held at the community's Marine Lines centre. Numbered approximately 500 in Mumbai, the community is outcast in some places of the world.

Twin birthday celebrations in the community

“In our community, we have twin manifestations. Today is Bab's birthday and tomorrow (Wednesday) we will be celebrating Baha'u'llah's as per the Badi Calendar we follow. Our days start from sunset, so the first celebrations happen after dusk,” said Nargis Gaur, Secretary of the Local Spiritual Assembly of the Baha'is of Mumbai.

Event on Tuesday commemorated the 1819 birth of Siyyid ‘Ali-Muhammad in Shiraz, Iran, who later took the title “Bab,” meaning “the Gate”. The Bab was the herald who provided spiritual preparation for Baha’u’llah, founder of the Baha’i Faith. Wednesday's celebration will commemorate the 1817 birth of Baha’u’llah (born Mirza Husayn-‘Ali) in Núr, Iran. Baha’u’llah means the “glory of God.”

“Though Bab was younger, it was in him that the spirit came first in 1844. His work from 1844 to 1850 mainly was about preparing people for the arrival of the promised one. Baha'u'llah revealed himself as the chosen one in 1863 in Garden of Rizwan in Baghdad,” said Ms Gaur, adding that his teachings and sacred writings are the basis of the Baha’i Faith.

Propagating the mantra of “Unity in Diversity”, the community describes itself as an inclusive faith whose followers firmly believe that the global community must see itself as one people. Since its founding, the Baha’i faith has grown to more than six million believers across the globe. 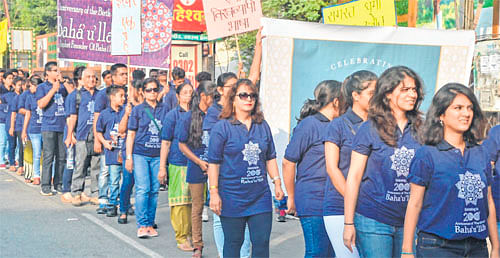