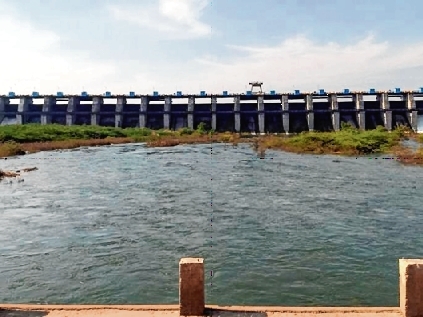 Aurangabad: As many as 6 of the 9 major dams that supply water to urban and rural areas in the drought-prone Marathwada region continue to face shortage, the data released by the irrigation department stated on Friday.

Dams, including Manjara and Majalgaon in Beed, Siddheshwar in Hingoli, Lower Terna and Sina Kolegaon in Osmanabad, Lower Dudhana in Parbhani are still in dead storage as rainfall has receded in the state.

There are 9 major and 800 medium and small irrigation projects in Marathwada. According to the irrigation department’s latest report, major projects in the region are in a slightly better position with 56.47% storage, compared 30.49% last year.

As of today, the major projects hold a total of 3,828.65 million cubic metre (mcm) water. However, the scenario with medium-sized projects seems bleak. Medium projects in Mara­thwada (Aurangabad region) have 317.19 mcm water, which is 21.06% of their total capacity. It was 24.25% last year on same day.

The small projects are in a slightly better shape with a gross storage of 4,473.44 mcm. This storage is 40.89% of total capacity, which was 26.92% same day last year, the department’s report stated. Of the 9, 6 major projects are in dead storage, whereas two -- Jayakwadi in Aurangabad and Lower Manar in Nanded -- are full.

Yeldari of Hingoli has live water storage, which stands at 7.84% (188.18 million cubic meter) of the project’s total capacity. “Excess use of water for sugarcane cultivation has always been the primary cause for the shortage every year. However, this time around, it is the scanty rainfall that has kept most of the projects dry,” water expert Pradeep Purandare said.