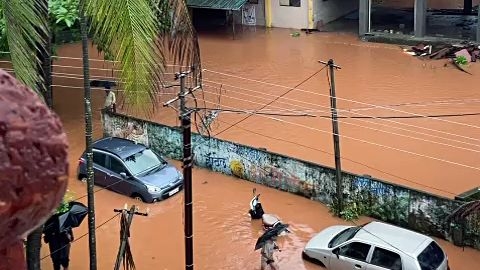 Maharashtra, July 22 (ANI): Roads and vehicles submerged due to the rise in water level of all rivers, in Ratnagiri on Thursday. | ANI

In Kolhapur district, as many as 47 villages were cut-off after roads leading to them were submerged in water due to heavy rains and 965 families were shifted to safer places, while the Panchganga river hovered near the danger mark, officials said on Thursday.

Chiplun, Khed and some other towns in Maharashtra's Ratnagiri were inundated following heavy rains, with inclement weather and incessant downpour creating difficulties for the government agencies to carry out rescue operations in this district located in the Konkan region, a state minister said on Thursday.

An official said that two persons died due to a landslide near Parshuram ghat in the district during the day.

Major rivers in Ratnagiri district, including Jagbudi, Vashishti, Kodavali, Shastri, Bav have been flowing above the danger level following heavy rains. As a result of this, Khed, Chiplun, Lanja, Rajapur, Sangameshwar towns and nearby areas have been affected and the government agencies are engaged in the task of shifting local residents to safer places, the Maharashtra Chief Minister's Office (CMO) said earlier.

Talking to PTI over phone, Transport Minister Anil Parab, who is the district guardian minister of Ratnagiri, said that road connectivity in parts of the district has been completely snapped due to heavy rains.

"Chiplun town is completely inundated. Similar situation prevails in Khed. There is difficulty in reaching these places since all roads are closed. Rescue teams from municipality, Coast Guard, Customs are using their boats to shift people from the low- lying areas. We have opened marriage halls, school buildings so that the evacuated people can spend their night there," he said.

Parab, who is in Ratnagiri to monitor the rescue and relief operations, said that National Disaster Response Force (NDRF) teams are unable to reach the spots due to unfavourable weather conditions.

"The helicopters that are engaged in the operations had to go back. The stranded people will be evacuated to safer places when choppers reach. Till then, we are providing food and water to the affected people," he added.

The minister said that the region has been witnessing continuous rain and the water level of rivers is not showing signs of receding.

Ratnagiri collector told PTI that incessant showers led to an incident landslide in the district, in which two persons were killed.

"The landslide near Parshuram ghat claimed the lives of two persons. A rescue team has reached the spot to assess if there was any more damage. Identification of the victims is being carried out. Heavy rainfall and flooding on the streets have affected the communication in the region," he said.

"The flooding in Chiplun town has not claimed any life so far. But we will be able to assess the damage to life and property only after the water recedes," Patil said.

Earlier in the day, Chief Minister Uddhav Thackeray took a review of the situation in Ratnagiri and Raigad districts by holding a meeting with the officials. During the meeting, he said that the India Meteorological Department (IMD) has issued an alert of heavy rainfall in this region for the next three days.

At least five people have died in the landslides that occurred in Maharashtra's Raigad district caused by incessant rains that battered the region over the last 24 hours.

She had earlier informed that 15 people have been rescued from the landslides. At least 30 people are still trapped inside, she had said earlier.

Four landslides have been reported in Raigad due to incessant rains, which have led to the roads being blocked.

Meanwhile, Raigad Guardian Minister Aditi Tatkare informed that the Maharashtra government has sought assistance from the Central government and Army to rescue the people trapped in Mahad.

"NDRF team is having trouble reaching the affected villages as roads are submerged underwater," the official said.

Earlier on Thursday, Maharashtra Chief Minister Uddhav Thackeray held an emergency meeting to take stock of the flood situation in Ratnagiri and Raigad districts in the state, caused by torrential rains that have battered the region over the past 24 hours.

Two teams of the NDRF were rushed to Ratnagiri's Khed and Chiplun areas to tackle critical situations due to high tide and heavy rain. Two more teams have been mobilised for rescue operations one each for Khed in Ratnagiri and for Mahad in Raigad, from Pune headquarters.

The India Meteorological Department (IMD) has issued red and orange alerts for several regions in the state that are set to receive heavy rainfall in the next three days.

As per the visuals from Patan town in Satara district, Koyna River overflows due to heavy rainfall and flooding nearby areas.

Two persons were missing after landslide took place in the Wai tehsil of Western Maharashtra's Satara district on Thursday evening, an official said.

"We had to halt the rescue operations due to incessant rains and the possibility of further landslide at the same site. The operation will commence tomorrow morning," he said.

As many as 47 villages were cut-off in Kolhapur district of Maharashtra after roads leading to them were submerged in water due to heavy rains and 965 families were shifted to safer places, while the Panchganga river hovered near the danger mark, officials said on Thursday.

Two persons, including a woman, were swept away at different places in the district during the downpour, they said.

Amid incessant rainfall in Kolhapur district, the water level of the Panchganga river continued to rise at the Rajaram weir, officials from the district disaster management cell said.

The officials said that at 10 pm on Thursday, the water level of the Panchganga river was 41.2 feet at the Rajaram weir, just short of the danger mark of 43 feet.

According to the district administration, contact of as many as 47 villages in Shahuwadi, Panhala, Gaganbawda, Radhanagari, Ajra, Gadhinglaj, and Chandgad tehsils was cut-off from other parts due to roads leading to them getting submerged in rainwater.

Till 8 pm, a total of 965 families from various rain-affected areas were taken to safer places, the officials said.

"At least 650 families from Chikhali village under Karvir tehsil were taken to safer places along with 960 cattle," they said.

Local residents managed to save her family members - Saurabh Kangralkar (19) and Kalpana Kangralkar (50), they said.

At least 10 state highways, 29 district highways and 18 rural roads were closed for traffic due to flooding at various stretches, the officials said.

Meanwhile, the administration said two teams of the National Disaster Response Force (NDRF) have reached the district to assist it in rescue and relief operations.

"One team has been deployed in Shirol, while the other one has been sent to Karvir tehsil," said an official.

The road near Jadhavwadi Nile in Shahuwadi tehsil and one connecting Kolhapur to Ratnagiri in coastal Konkan were closed for vehicular movement as water came onto the pathway, another official said.

As the bund at Khochi Dudhgaon got submerged, the traffic going towards Sangli district from that route was diverted.

"The vehicular traffic was diverted through the alternative routes," he added.

The catchment areas of several dams in the region witnessed heavy rainfall in the last 48 hours, which led to rise in their water level.

In August 2019, unprecedented rains had wreaked havoc in western Maharashtra, especially in Kolhapur and Sangli districts.