Maharashtra: Family of four crushed to death in car-truck collision in Osmanabad 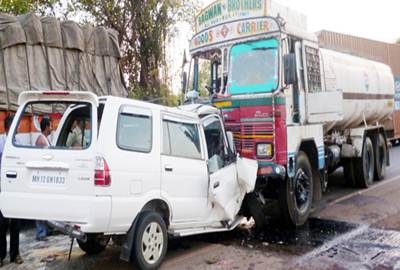 Four members of a family were crushed to death when their car collided with a container truck laden with tractors in Maharashtra's Osmanabad district on Friday, police said.

The accident took place near Bhadachiwadi village on Osmanabad-Dhoki-Latur Road in the early hours of the day, inspector Suresh Sable of the rural police station said.

The family had come to Osmanabad for a function and were returning to Latur at the time of the incident, he said.

The car was badly damaged and had to be extricated from the container truck with the help of a crane, the official said.

The driver of the container truck, which was transporting tractors, fled the scene after the collision, he added.