Maharashtra Congress chief Nana Patole has hit out against the BJP over alleged attempts by the saffron party to make a protest by the Mumbai Congress, turn violent. He added that the party will continue to protest till the Prime Minister apologises.

Meanwhile, the Maharashtra Congress on Monday temporarily put off its planned agitation outside BJP leader Devendra Fadnavis's official residence here citing inconvenience caused to motorists, but not before BJP functionaries took to streets to confront supporters of the ruling party.

The proposed agitation was part of demonstrations that the Congress has planned across the state to demand an apology from Prime Minister Narendra Modi for allegedly 'insulting' Maharashtra by some his comments made in the Lok Sabha recently in connection with COVID-19 pandemic.

The Mumbai Police stopped Maharashtra Congress chief Nana Patole, who was to lead the protest, outside his residence here and detained other workers of the party.

BJP MLA Ashish Shelar claimed the Congress's agitation had failed, and alleged that the police also detained some of his party leaders and workers who were waiting to confront Congress workers if the latter showed up outside the residence of Leader of Opposition and former CM Fadnavis.

Fadnavis said there was no question of an apology from Modi, and rather the Congress should apologise for "ruining" the country.

PM Modi had said in the Lok Sabha that during the first COVID-19 wave, when people were following lockdowns and pandemic norms, the Congress was standing at a Mumbai station and scaring innocent labourers into fleeing to their native states.

On Monday, Patole said considering the inconvenience caused to motorists, his party was putting off the agitation.

"Modi insulted the culture of Maharashtra, the Maharashtra of Chhatrapati Shivaji Maharaj. We condemn the BJP's culture of supporting Modi who insulted Maharashtra," the Congress leader told reporters.

Patole squarely blamed the BJP for causing inconvenience to the people as vehicular movement in parts of south Mumbai was affected. He claimed the BJP brought people on the streets by "paying them money to take part in the counter protest".

"The BJP is backing Modi who insulted Maharashtra. The party is 'Maharashtra drohi' (traitor). The BJP caused inconvenience to the people. We are putting off the agitation temporarily in view of that," he said.

Patole said the Congress's agitation will continue outside the residences of BJP MPs in the state.

Asked if the Congress could not go ahead with the protest due to the BJP's aggressive stance, Patole replied in the negative.

"We did stage a protest. Our people reached there (outside Fadnavis's residence). Police detained our workers. But, it is the BJP which resorted to goondaism and stopped people on the roads," Patole alleged.

He said the Congress will not do anything that will insult Maharashtra and cause inconvenience to the people.

Earlier in the day, several Varkaris (devotees of Lord Vitthal), playing clash cymbals, joined Patole outside his residence as he set out to lead the demonstration.

Some of the Varkaris, including children, who had gathered there, appeared to be clueless about why the protest was called.

Meanwhile, Fadnavis said there was no question of an apology from the prime minister.

"Instead, the Congress should apologise to the country. It has ruined the country. Let people like Patole engage in drama to the extent they want. It will have no bearing (on the people)," he said.

Shelar, who later visited the Malabar Hill police station in south Mumbai, accused the state MVA government (comprising the Shiv Sena, NCP and Congress) of trying to suppress the agitation in a "dictatorial manner" by detaining BJP leaders like Gopal Shetty, Kalidas Kolambkar and others.

The BJP MLA also claimed that Patole's agitation had failed as there were "not even five people" with him.

He also said the Congress's Maharashtra and Mumbai units were not on the same page over the agitation. 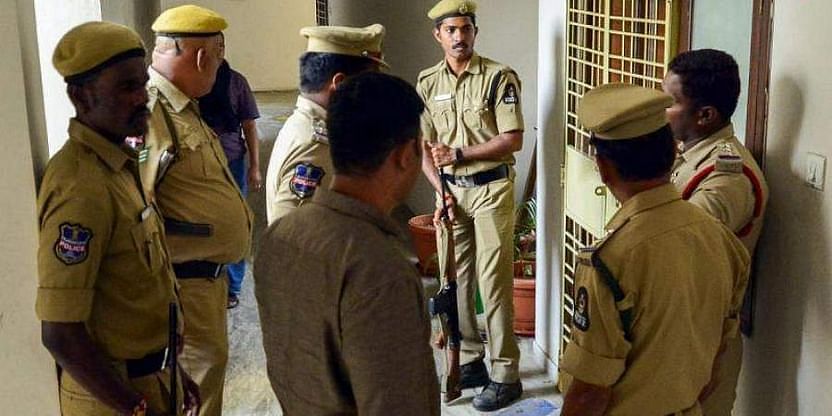