A Tribute to Mahatma Gandhi 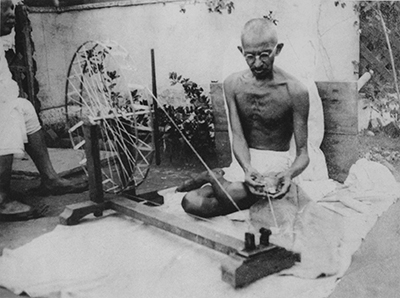 The people world over respect Gandhiji as a Messiah of Peace. Indians worship him as the Father of the Nation because under his sagacious leadership, India won freedom from the imperial grip of Great Britain, writes MADHU DEOLEKAR.

October 2, is the birth anniversary of Mohandas Karamchand Gandhi popularly known as Gandhiji or Mahatma Gandhi. The people world over respect Gandhiji as a Messiah of Peace. Indians worship him as the Father of the Nation because under his sagacious leadership, India won freedom from the imperial grip of Great Britain.

How much reverence even the outsiders had for Gandhiji is reflected in the tribute paid to him by London Times when he fell to an assassin’s bullet. “No country but India and no religion but Hinduism could have given birth to a Gandhi”.

Gurudeo Rabindranath Tagore wrote, “Occasionally, there appear in the area of politics, makers of history, whose mental height is above the common level of humanity. They wield an instrument of power, which is almost physical in its compelling force and often relentless. The influence which emanated from his personality was ineffable, like music, like beauty. Its claim upon others was great because of its revelation of a spontaneous self-giving.”

Who were Gandhis? Where was their native place? What was their hereditary profession? Gandhiji gives his family history in brief in his autobiography. Gandhiji writes:

“The Gandhis belong to the Bania caste and seem to have been originally grocers.  But for three generations, from my grandfather, they have been Prime Ministers in several Kathiawad States. Uttamchand Gandhi, alias Ota Gandhi, my grandfather, must have been a man of principle.

State intrigues compelled him to leave Porbandar, where he was Diwan, and to seek refuge in Junagadh. There he saluted the Nawab with the left hand. Someone, noticing the apparent discourtesy, asked for an explanation, which was thus given: ‘The right hand is already pledged to Porbandar’.

Ota Gandhi married a second time, having lost his first wife. He had four sons by his first wife and two by his second wife. I do not think that in my childhood I ever felt or knew that these sons of Ota Gandhi were not all of the same mother. The fifth of these six brothers was Karamchand Gandhi, alias Kaba Gandhi, and the sixth was Tulsidas Gandhi. Both these brothers were Prime Ministers in Porbandar, one after the other. Kaba Gandhi was my father.

He was the member of the Rajasthanik Court. It is now extinct, but in those days it was a very influential body for settling disputes between the chiefs and their fellow clansmen. He was for some time Prime Minister in Rajkot and then in Vankaner. He was a pensioner of the Rajkot State when he died.

Kaba Gandhi married four times in succession, having lost his wife each time by death. He had two daughters by his first and second marriages. His last wife, Putlibai, bore him a daughter and three sons, I being the youngest.”

However, there is a total disconnect between the precept and the practice of those who claim to be the inheritors of Gandhiji’s legacy. There is no mass euphoria which you often see in celebrations of local leaders’ birthday, who are antithesis of what Mahatma was.

Gandhi Jayanti, from a national celebration covering all sections of the society across the country, has now been reduced to the ritualistic programme. It is a matter of study to find out with passing of generations why enthusiasm for celebrations in honour of great men goes on declining.

However, the euphoria and zest for celebrating traditional festivals like Dahi-handi, Ganeshotsava, Navaratri, Durgashtami, Holi and Diwali have still remained widespread and attract the participation of people of all ages across the country.

One of the reasons for this decline could be the penchant of our leaders to reduce the importance of great men by limiting their message to the area of their birth or to the caste of his birth.

He did not keep any of his descendants and blood-relations anywhere near the position of power. Though, some descendants of erstwhile followers of Gandhiji, who bear the similar surname as Gandhi make people, believe that they are the scions of the great Mahatma. Rahul Gandhi’s grandfather was a Parsee gentleman called Feroze Gandhi.

What are the precepts of the Mahatma? Are Gandhiji’s teachings relevant to the present times? What was the mission of Gandhiji? He writes: “What I want to achieve – what I have been striving and pining to achieve these thirty years – is self-realization, to see God face to face, to attain Moksha.”

Gandhiji was a doer. He never liked to waste time. He believed in utilizing every minute for some purpose. He even learnt the work of a cobbler and presented a pair of shoes made by him, to his friend on his birthday. However the friend was so much overwhelmed by Gandhiji’s gesture that instead of putting the shoes on his feet he put them on his head and later on kept in a box for worship.

Some of the writings of Gandhiji reveal his mind, what he thought and believed. He often declared that he had an intense faith in the religion of his birth. When he was questioned about his religious belief he replied, “I call myself a Sanatani Hindu, because: I believe in the Vedas, the Upanishads, the Puranas and the writings left by the holy reformers. I reject everything that contradicts the fundamental principles of morality. Above all I call myself a Sanatani Hindu. In a concrete manner he is a Hindu who believes in God, immortality of the soul, transmigration, the law of Karma and Moksha, and who tries to practice Truth and Ahimsa in daily life, and therefore practices cow-protection in its widest sense and understands and tries to act according to the law of Varnasharma. all that goes by the name of Hindu scriptures, and therefore in avatars and rebirth.”

On Conversion Gandhi writes, “The one deduction I would like you students to draw is that you yourselves should not be torn from your moorings; and those from the West should not consciously or unconsciously lay violent hands upon the manners and customs of this country, in so far as they are not repugnant to fundamental morality. Do not confuse Jesus’ teaching with what passes as modern civilization. I ask you who are missionaries, pray do not do unconscious violence to the people among who you cast your lot. It is no part of your call, to tear up the lives of the people of the East by their roots.”

Is Belief in God Superstition?  A professor of Islamia College asked Gandhiji about his – belief in God. What was the basis of his belief? What was his experience?

Gandhiji replied, “If you would have me convince others by argument I am floored. But I can tell you this that I am sure of His existence than of the fact that you and I are sitting in this room. Then I can also testify that I may live without air and water but not without Him. You may pluck out my eyes, but that cannot kill me. But blast my belief in God, and I am dead. You may call this a superstition, but I confess it is a superstition that I hug, even as I used to hug the name of Rama in my childhood when there was any cause of danger or alarm. That was what an old nurse had taught me.”

Gandhiji commenting on the present system of democracy said, “The strength of the Centre must rest on the strength of its foundations in the villages and not at their expense. This naturally meant indirect elections to the legislative assemblies. He was critical of adult suffrage as a means for the capture of political power to put that power to a corrupt use. He wanted the Congress to be disbanded, and its sincere workers to do welfare and constructive work from outside the party and the Government.

Being asked ‘Why could not the constructive welfare work be done by the Congress party or by the Government’, Gandhiji replied: ‘Because Congressmen are not sufficiently interested in constructive work. We must recognize the fact that the social order of our dreams cannot come through the Congress party of today . . . There is so much corruption today that it frightens me. Everybody wants to carry so many votes in his pockets because votes give power . . . banish the idea of the capture of power and you will be able to guide power and keep it on the right path . . . There is no other way of removing the corruption that threatens to strangulate our independence at its very birth. He felt that he who was immune to the temptation of power could best oppose the men in power, and that even the legislators and judges were too close to the machinery of power to check-and-balance the executive.”