It is tricky times for tennis: Djokovic 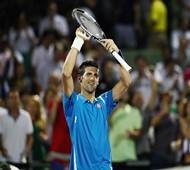 KEY BISCAYNE, FL - MARCH 25: Novak Djokovic of Serbia celebrates to the crowd after his straight sets victory against Kyle Edmund of Great Britain in their second round match during the Miami Open Presented by Itau at Crandon Park Tennis Center at Crandon Park Tennis Center on March 25, 2016 in Key Biscayne, Florida. Clive Brunskill/Getty Images/AFP == FOR NEWSPAPERS, INTERNET, TELCOS & TELEVISION USE ONLY == |

Berlin: Tennis is going through “tricky” times amid the swirling “rumours” of doping and betting, concedes Novak Djokovic but the World No.1 says he would not question the sport’s integrity till the time concrete evidence is presented to prove wrongdoing.

The Serbian star, who won his third Laureus Sportsperson of the Year award here, said he is proud to be part of a sport which to his knowledge is still clean.

“It’s tricky for tennis. There are many stories that go around; betting, match-fixing, doping, it seems the weight has come down on tennis. But I think it all comes down to anti-doping agencies, governing bodies; they need to come out with proofs, if they don’t it’s only rumours. I’m proud to be part of a sport that is clean,” Djokovic said after the awards ceremony in a press conference.

The 28-year-old Australian Open champion was reacting to recent statements by British star Andy Murray that the sport is not entirely clean.

Djokovic, Serena walk away with top honours at Sports awards

The affable Serb said he does not share the concernsexpressed by Murray.

“I don’t share his concern. As long as we don’t have proof that the sport is not clean, it is clean. I know Andy, I have spoken to him, he didn’t mean anything wrong,” he said.

Tennis has been hit by allegations of betting and doping in the last few months with Maria Sharapova getting suspended for using a recently-banned substance Meldonium. The Russian star, however, can expect some relief after WADA decided to penalise only those who used it after January 1.

Besides offering a passionate defence of his controversy-struck sport, Djokovic also spoke of his astonishing run in the circuit, during which he won three Grand Slams last year.

Djokovic said his secret lies in not “prioritising trophies”.

“I can’t speak for others but I extract my energy from my passion for the sport and life in general. That helps me stay humble and grounded. I never prioritise trophies as my motivation. You need something else to drive you, not just achievement,” he said.

One thing missing from his decorated trophy cabinet is an Olympic gold medal and the 2008 bronze-winner said he is putting the upcoming Games in Rio at par with Grand Slams as far as preparations are concerned.

“Olympics is as important as Grand Slams because we don’t get the experience of playing in a team too much. I feel privileged to be going to Rio and I would definitely playing both singles and doubles.

“I will prioritise it like a Grand Slam but still it’s not end for me even if I don’t win,” he added.