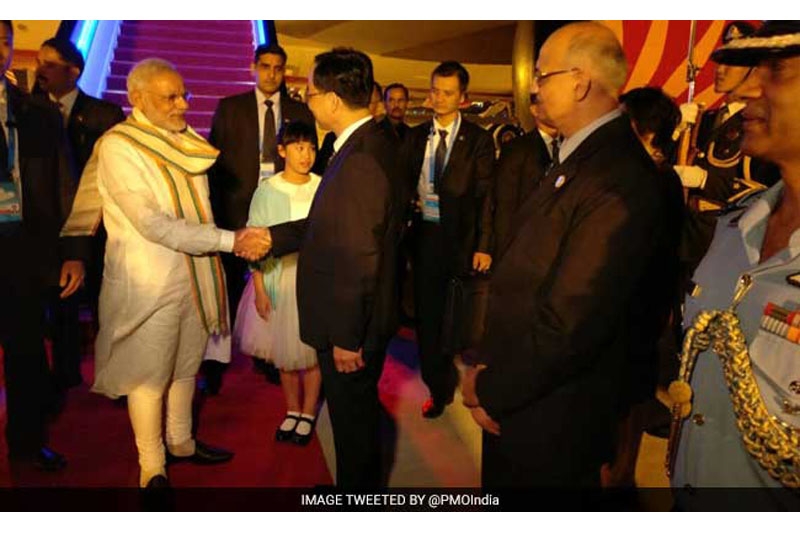 Hangzhou : Prime Minister Narendra Modi on Saturday flew into this Chinese city for the crucial G20 summit and talks with top world leaders, including Chinese President Xi Jinping on irritants in bilateral ties like India’s NSG bid and the CPEC, which runs through PoK.

Modi, who reached here after a two-day maiden visit to Hanoi, begins his programme on Sunday morning by holding talks with Xi, in their second meeting in less than three months. The two leaders had last met on the sidelines of the Shanghai Cooperation Organisation (SCO) Summit in June in Tashkent.

Sunday’s meeting is viewed as important in the backdrop of steady decline in the bilateral relations over a raft of issues including the USD 46 billion China-Pakistan Economic Corridor which runs through Pakistan-occupied Kashmir (PoK). The two leaders, who enjoy a good rapport, would discuss contentious issues, which will also include listing of Pakistan-based terrorist organisations in the UN and China stalling India’s membership at the elite Nuclear Suppliers Group (NSG).

This would be followed by a meeting of the BRICS (Brazil, Russia, India, China and South Africa) leaders ahead of the G20 summit, which would begin later in the day. Modi will also hold bilateral meetings with Australian Prime Minister Malcolm Turnbull and Saudi Arabia’s Deputy Crown Prince Mohammad bin Salman.

He will attend the G20 summit that begins tomorrow with this year’s theme of “Strengthening Policy coordination and Breaking a new path for growth” followed by a number of cultural programmes organised by the Chinese government.

On Monday, he will take part in the second and concluding session of the G20 and hold bilateral meetings with British Prime Minister Theresa May and Argentinian President Mauricio Macri before returning to Delhi. In all, he would reside in this picturesque city for about 48 hours, officials said. A meeting between Modi and US President Barack Obama is, however, not on the cards during this trip, they said.