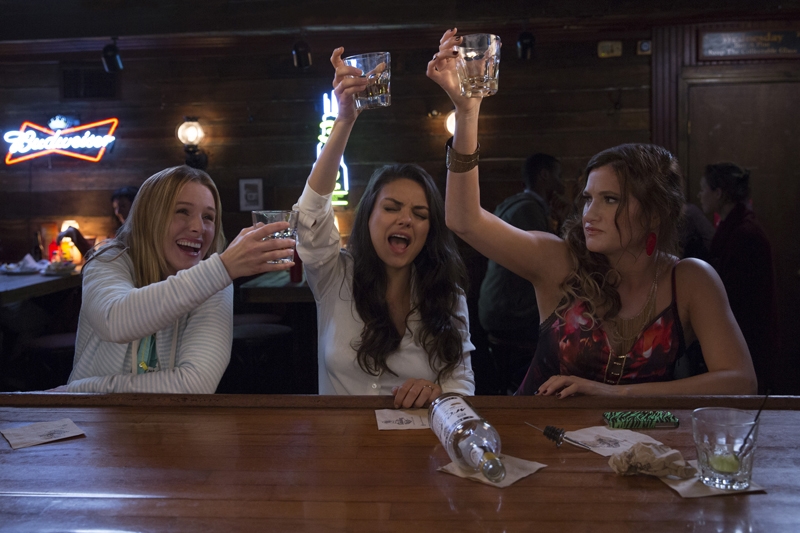 It occasionally reminds you of conventional mothers – who kill themselves to be perfect moms and yet feel that they are a total failure at some point of time in their lives.

The film aims to take a satirical look into the lives of such mothers who are bogged down by; peer pressure, their lazy and selfish better halves, dependent children and exploitative bosses.

The narrative begins with the voice over of Amy Mitchell, a mother of two kids living in suburban Chicago with her good-for-nothing husband Mike. She tells us that, she has been married for over a decade and she feels constantly harried with; juggling all household work, part-time job and two over-indulged kids without any help from her husband.

At one point of time in her life, when everything goes wrong, she nearly breaks down and snaps, “Why are we killing ourselves trying to be perfect moms?”

So, she along with her friends, Carla Dunkler and Kiki decide to be, “Bad Moms.”

The narrative arc of “Bad Moms” traverses from good, to bad, to wild and balances its nuggets of truth with amusingly raunchy humour which is scattered all over.

The writing reflects Lucas and Moore’s typical style. They specialise in the idea of friends liberating themselves through completely inappropriate behaviour. They had first written, “The Hangover” and later wrote and directed the 2013 released college romp, “21 and Over.”

The script is lazily drafted with; a shoddy screenplay, straight laced visuals and one dimensional characters. But these characters are brought to life by strong performances that are well-extracted by the directors.

Mila Kunis as the protagonist, perfectly slips into Amy’s shoes. Her act of being disastrous or her staid outlook to life along with her comic timing are pitch perfect. She is aptly supported by Kathryn Hahn as Carla the brazen, voluptuous single mom who is constantly out to have a good time and Kristen Bell as the pert and perfect, hausfrau – Kiki.

With contrasting personalities and wavering energy levels, the on-screen camaraderie among the three of them, is striking.

To balance their act, even though she plays her part impeccably, Christina Applegate as the icy, catty and cool, antagonist in the form of the PTA President Gwendolyn, is more of a caricature.

Oona Laurence and Emjay Anthony as Amy’s kids are endearing. It is initially heart rending to watch them being left on their own. But soon, Emjay impresses you when he starts preparing his own breakfast.

And, the hunky Jay Hernandez, as the widower Jessie in a half-baked role is wasted. So is; David Walton as Mike, Annie Mumolo and Jada Pinkett Smith as Gwendolyn’s side-kicks – Vicky Latrobe and Stacy.

On the technical front, with moderate production values, the film hardly breaks any moulds.

Overall, if only the bad moms was more wild, spunkier and aggressive, perhaps the film would have been more fun to watch.