VACCINATION RECORD IN INDORE: 2.25L plus vaccinated in one day

Over 2.21 lakh people were vaccinated in one day which is the highest number of vaccinations done in any city in the country.

“We have vaccinated over 2.21 lakh people on Monday. The number will increase as we are still counting offline registrations,” district immunisation officer Dr Pravin Jadia said. He said that vaccination was done at over 675 sites and people showed enthusiasm to get the jab to beat the deadly COVID-19.

Meanwhile, all officials of Indore Municipal Corporation and district administration were busy maintaining the facilities and supply of vaccinations at the centres to create history.

In-charge minister Tulsi Silawat also thanked people, administration, health officials, and all people involved in the work for their dedication and commitment to make Indore No. 1 in vaccination just like cleanliness. MP Shankar Lalwani said there was unbridled enthusiasm among the people that ensured the record, and thanked the people for it. Collector Manish Singh said that meticulous planning ensured our success.

Immunisation officer Dr Tarun Gupta said, over 2.93 lakh doses were allotted and out of which 2.21 lakh were used.

“We have achieved an over 111 per cent target as we had the target of vaccinating 2 lakh people. At present, over 72,000 doses are still left in our stock and we will use them for continuing the mega campaign in the coming days. We will get more doses from the state as we are targeting over 1 lakh people for seven days till June 31,” Dr Gupta added. 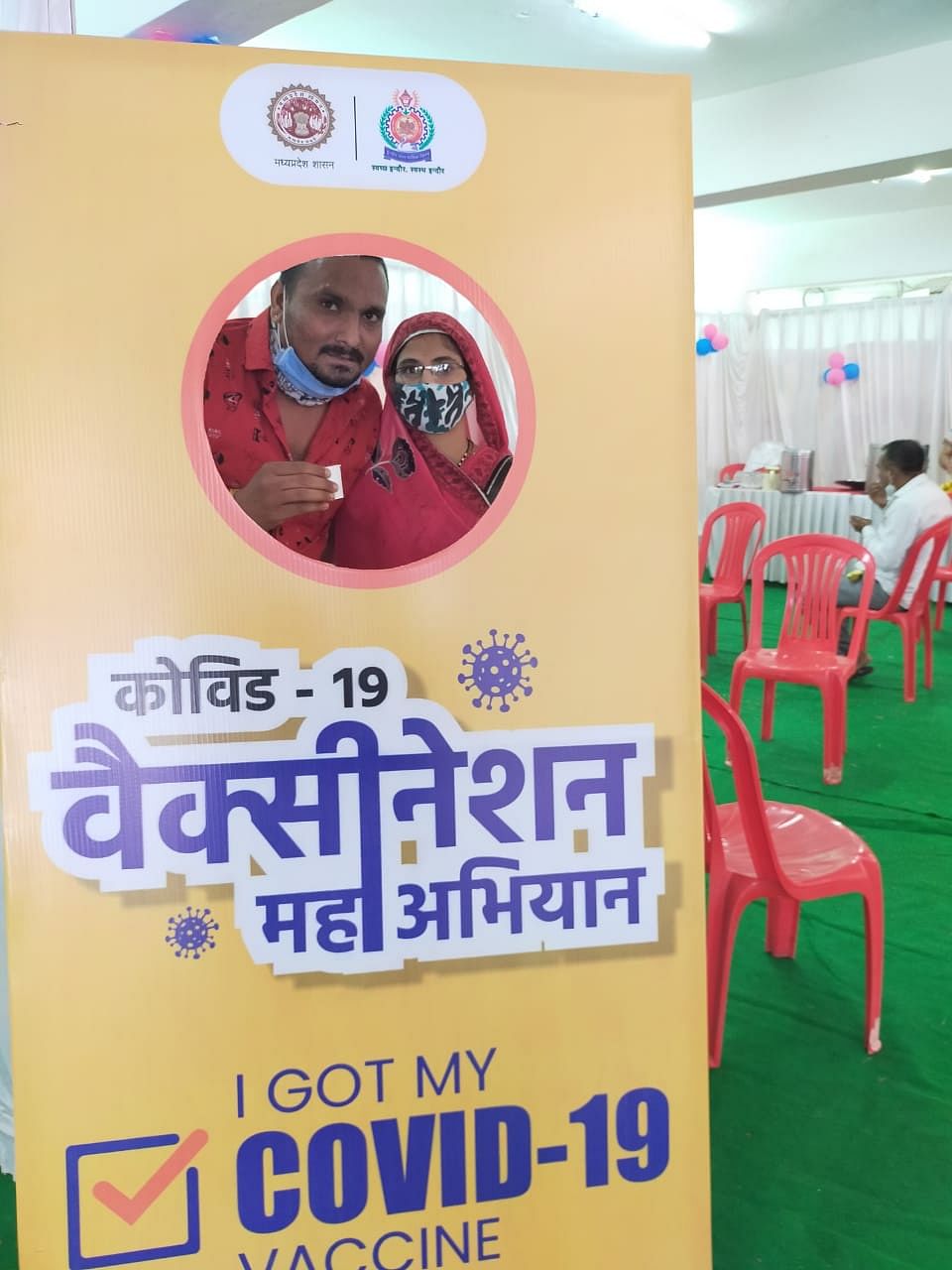 Counting of the vaccination will be continued as many people were vaccinated offline and many had used other IDs for identity proof including voter ID, Aadhaar Card, driving license, passport, pan card, and the bank passbook.

“About 700 vaccinators and the same number of operators were deployed for the mammoth task. We had also called staff from Index Medical College, Sri Aurobindo Medical College, Government Nursing College, MY Hospital, Maa Ahilya COVID Care Centre, RRT, and others,” the officials said.

The district was divided into 4 zones and officials had also called over 25 vehicles from Indore Municipal Corporation and will use buses as well for distributing the vaccine. People had shown enthusiasm in getting the jab as a large number of people had reached the centers even before 8 am. After getting an initial pace, vaccination continued till 9 pm in the city and touched the record.
About 16,000 people were vaccinated in the first two hours of the drive and it increased to over 50,000 by 12 pm and crossed 1 lakh mark by 2 pm. The number reached a record of 1.86 lakh people being vaccinated till 5 pm which concluded to over 2.18 lakh till 9 pm. The mega vaccination drive in the city was being hit by the server issue for two hours between 2 pm and 5 pm due to which vaccination was stopped at many centers. People had to wait to get the vaccination started while the officials at centers were waiting for the server to verify and download the certificates. People waiting for the verification were seen at many centers including Vaishnav Academy, Mangilal Churiya Hospital; drive-in centers, and others.

With an aim to encourage people for vaccination, Prime Route Bus Owners Association offered free bus tickets to passengers for getting vaccinated at the Navlakha Vaccination Centre on Monday.

"We are offering free bus tickets to passengers getting vaccinated at the Navlaka vaccination centre for a one-time journey," Prime Route Bus Owners Association president Govind Sharma said, adding “We have suffered huge losses due to COVID-19. Therefore, we are praying that this vaccination drive gets successful and this pandemic gets over soon."

Read Also
Indore: Over 3.56L get vaccinated in division, all districts exceed target Vaccination not started at many centres till 10 am

Administration had claimed to start vaccination at 8 am on Monday but people had to wait for more than two hours at many centers including those in malls.

“I reached the centre at 8 am but the vaccinators told me that the vaccine had not come. I had to wait till 10 am to get the doses,” Mahendra Kumar, a beneficiary, said.

Chief Medical and Health Officer Dr BS Saitya had to take charge of vaccine distribution due to delay in sending the vaccines at many centers. He reached 56 Dukan, C21 Mall, and at Mhow with the vaccination doses. Long queues for vaccination could be seen at all vaccination centers on Monday as the city has achieved a record of vaccinating the highest number of people in a day. Out of 675 vaccination sites running across the district, 13 sites have vaccinated over 1000 people including the Emerald Heights Drive in Centre where over 2000 people got the jab. Similarly, about 98 sites were those where over 500 people were vaccinated.

Along with providing facilities to beneficiaries, Indore Municipal Corporation had also distributed over 4000 food packets for the vaccinators, computer operators, and other staff involved in making the history of vaccinating the highest number of people in one day.

IMC Commissioner Pratibha Pal had monitored the vaccination drive and facilities throughout the day from the ICCC Control Room. In-charge minister Tulsi Silawat reached vaccination centers in Sanwer on cycle and also appealed to the people to wear masks and get vaccinated at the earliest.

He inaugurated the mega vaccination drive at Dhanvantri Nagar centre.

Selfie points at most of the vaccination centers had become an attraction for people as they took photographs after getting the jab and uploaded it on their social media accounts.

Many people had come to the centers with families to get the jab and they also captured the moment to make it memorable. HomeIndoreVACCINATION RECORD IN INDORE: 2.25L plus vaccinated in one day