Thousands of fluffy birds try to escape from damaged truck to nearby farms.

Villagers picking up chickens to carry them home in Sendhwa tehsil |

Khetia/ Sendhwa: There is no dearth of funny incidents around that happen every day. One such incident was reported on Monday early morning near Dondwada village of Sendhwa tehsil in Barwani district of Madhya Pradesh when a pick-up truck that was carrying poultry overturned.

Though this might seem like another road accident, what happened next is the twist. After the accident, villagers rushed to site but not for help. They looted the poultry and went back home rich. They were seen loading both their hands with as many chickens as they could. Some of them stuffed them in bags to fit in as many chickens as possible. After collecting enough chickens, while some walked away, others left on motorbikes from the place.

While the driver and helper tried to attend to damaged truck, local villagers looked forward to a week-long feast. “More than 1,000 poultry were loaded in the pick-up truck but only 300 to 350 are left,” pick-up truck driver Sanna Ullah, who received minor injuries in an accident, said. The driver claimed that he called local police and sought help but they didn’t respond. “The accident cost me a loss of Rs 1.5 to Rs 2 lakh as there is a high demand for country chicken found in this region during this time,” Sanna Ullah added.

According to information, the accident took place on Sendhwa - Kushalgarh state highway. The vehicle was carrying more than 10,000 chickens, which were being transported from Malegaon in Maharashtra to Khilchipur village in Rajgarh district of Madhya Pradesh. On the way, driver lost control after he attempted to save a cow. 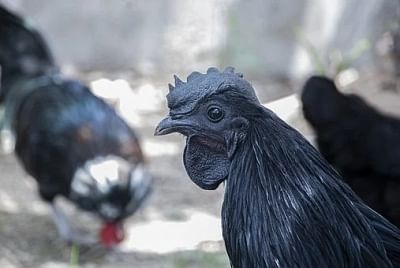