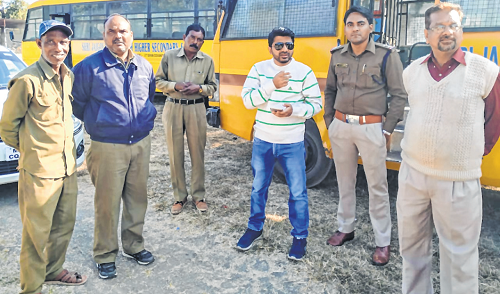 Indore: Road transport department officials hit the roads on Wednesday to take action against vehicle owners who violated norms, had wrong number plates and illegally installed hooters. Acting on Election Commission’s orders, the department officials launched the drive at Radisson Square and removed number plates of 17 vehicles, which had symbols of different political parties and numbers were written in unauthorised fonts.

“We removed number plates of vehicles and also caught a vehicle in which illegal hooter was installed. A fine of Rs 16,500 was collected from vehicles and the owners were warned not to repeat it again,” ARTO Nisha Chouhan said. RTO officials had to face different excuses from vehicle owners and most of them refused to pay fine.

Interestingly, most commuters were giving excuse of not having the cash for paying the fine as some of them had forgot wallets at home and others were having e-wallets or cards. However, excuses given by commuters did not help. They had to pay fine as officials threatened to seize their vehicles. “As we were strict, people paid fine by bringing money from ATM or by other sources,” Chouhan said.

RTO officials cancelled permit of one bus while two buses were fined on not following Supreme Court’s norm. “13 buses of Jai Govind Gopinath School, 12 buses of Wishwood School and 15 buses of Sai Academy, all in Mhow, were inspected and two buses were fined. Permit of one bus was cancelled,” ARTO Chouhan remarked. She said GPS of Jai Govindnath School was not working while speed governor was found tampered due to which fitness certificate was cancelled.