In a show of strength, Congress on Tuesday took out a huge rally in the city to protest against action against its worker sending the district administration into a tizzy. There was heavy police force present.
Staff Reporter 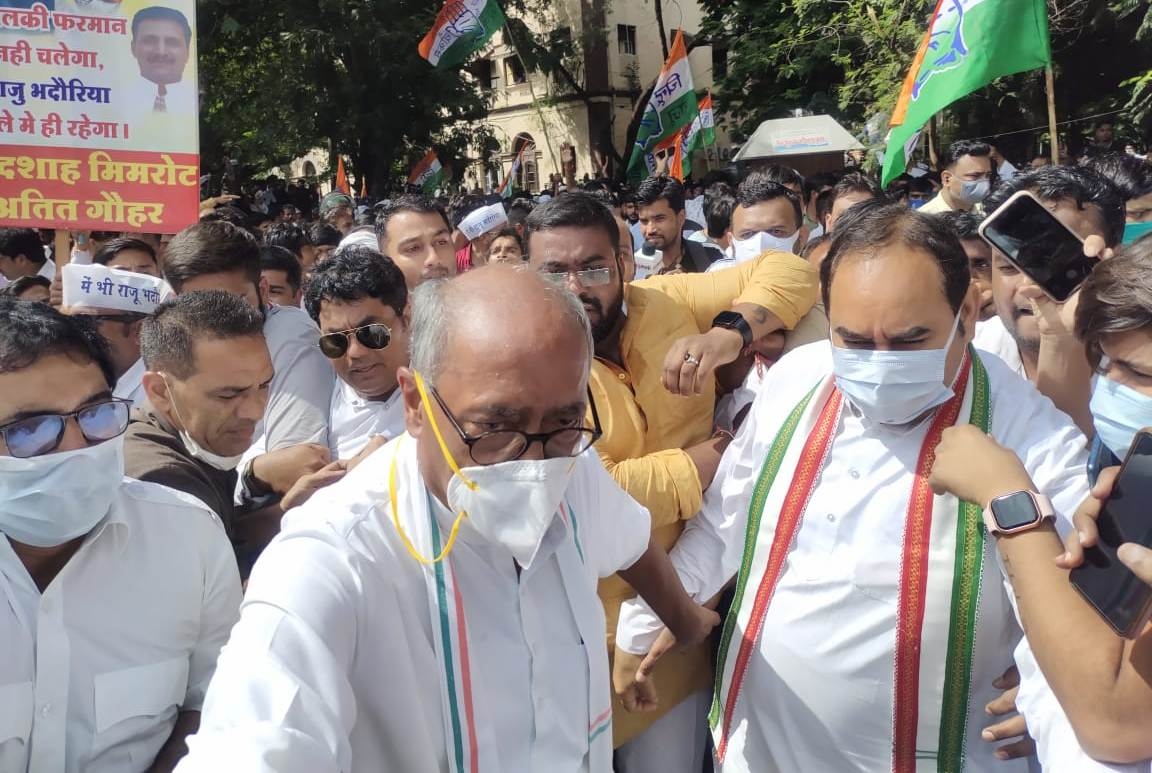 Congress veteran and Rajya Sabha member Digvijaya Singh on Tuesday accused the Madhya Pradesh government of falsely implicating his party leaders in criminal cases at the behest of the ruling BJP.
He said government officials should adhere to the Constitution while carrying out their duties.
Singh led a party rally against the Indore district administration to protest against what he alleged internment of Congress leaders and filing of false criminal cases against them.
"The administration in the state is implicating innocent Congress leaders (in criminal cases), demolishing their houses by terming them illegal and harassing them at the behest of the BJP," he alleged.
Singh said the Opposition Congress will not tolerate the "oppressive" behaviour of the administration and fight against it on the streets and also in the Assembly.
The former chief minister said the party will move courts for quashing of alleged false cases against Congress leaders.

Meanwhile, in a show of strength, Congress on Tuesday took out a huge rally in the city to protest against action against its worker sending the district administration into a tizzy. There was heavy police force present.

Sources said the administration had only given permission to 50 people to submit a memorandum.

But Congress workers took out a rally, due to which the traffic was affected. Covid protocol was also violated in the rally.

According to Hira Nagar police station in charge Satish Patel, a case under section 188 of the IPC has been registered against Chintu Chouksey, Sanjay Bakliwal and others for taking out the rally without permission on the complaint of Nayab Tehsildar Malharganj.

Activists of Karni Sena also submitted a memorandum to an administrative officer against the action taken against congress leader Raju Bhadoriya on Tuesday. People of Rajput community gathered at a place in Vijay Nagar area and reached commissioner office in vehicle rally. The protest was done on the leadership of Dharmendra Singh Gautam, national vice president of Karni Sena.

The government will face a ‘dhakka’. Chief Minister will change. There is a lot of anger and negativity in people against the current BJP government. Results will tell you the final situation.

He laughed off when he was asked about his previous comment on Shishu Mandi. He had accused the RSS-run Saraswati Shishu Mandir of sowing the seeds of hatred towards other religions in the minds of children, which he said later leads to religious hysteria and riots in the country.

He supported a caste-based census, the demand for which has been made by the Opposition in Parliament, with some members from the treasury benches also supporting this. He cited Bihar Chief Minister Nitish Kumar support for it. He said Prime Minister Narendra Modi has to make a decision on it.

The fund has been misused. It should be audited.

I will not comment on Sidhu. Captain Amrinder Singh has always been fighting against drugs that comes to India through Pakistan. The comment should be given by party members in Punjab.