New Delhi: New CBI Director Subodh Kumar Jaiswal has directed all officials of the agency to be dressed in formals on duty, warning them that casual dressing will not be allowed. In an order by the Deputy Director Administration, it has been made clear while all male staff should be dressed in trousers, collared shirts and formal shoes with proper shaving, female staffers will wear suits, sarees, formal shirts and trousers. “No jeans, T-shirts, sports shoes, chappals and casual attire is allowed in the office," the order said.

New Delhi: The Centre has asked all states to set up special search committees to find out talented people to nominate for Padma awa­rds but so far have been left out of consideration despite their excep­t­io­nal contributions. The Modi government has been honouring many “unsung heroes”, contributing to society in different ways, with Pad­ma awards. The letter from the Union Home Ministry to chief secys of all states and UTs was sent as the Centre opened the window to receive applications on ‘padmaawards.gov.in’ from June 1 to Sep 15.

Kolkata: The Centre is sending a team to West Bengal to review the areas-hit areas. According to sources, the team will begin its 3-day visit on June 6. “The Central team will be divided in two sub-teams and minutely observe the cyclone-affected areas of Midnapore and South 24 Parganas. After the 3-day visit, a review report will be submitted to the Centre,” they added. —FPJ Correspondent

Ghaziabad: Farmers protesting the contentious farm laws will hold demonstrations outside the residences of BJP lawmakers across the country on Saturday, a Bharatiya Kisan Union (BKU) office-bearer said on Friday. The protest outside the residences of BJP MPs and MLAs is to mark the one year of the promulgation of these laws as ordinances by the Centre, the official said. "The protestors would burn the copies of the legislations outside the residence of BJP MPs and MLAs across the country as a symbolic protest against the Centre," BKU media in-charge Dharmendra Malik told PTI.

New Delhi: The first pier of the elevated section of the Delhi-Meerut Regional Rapid Transit System in the city has been completed near the upcoming New Ashok Nagar RRTS station, the National Capital Region Transport Corporation (NCRTC) said on Friday. The Delhi portion of the elevated RRTS section starts from Sarai Kale Khan RRTS station and passes above the existing Barapullah Flyover while crossing the Yamuna river to reach New Ashok Nagar RRTS station. The height of the constructed pier is 6.5 meter, and average height of the piers in the stretch varies from 5.6 meter to 17 meter, the NCRTC said.

Ludhiana: A national-level weightlifting player accused a police official in Ludhiana of raping her several times on the pretext of getting her a government job in sports quota. “The matter has come to the fore now but the allegations have not been confirmed yet. The allegations made by the player will be first investigated. Appropriate action will be taken after verifying the allegations," Pragya Jain, Additional Deputy Commissioner of Police (ADPC), Ludhiana told ANI. Police has started investigation into the matter.

Lakhimpur Kheri (UP): It is celebration time in the Dudhwa Tiger Reserve (DTR), where two rhinos have given birth for the first time to a calf each earlier this week. With this, the small herd of three cows and a bull, has increased to six rhinos. The parent rhinos had been relocated to the Belrayan range in 2018. This was a part of a larger plan to repopulate Dudhwa with the Indian single-horned rhino that once roamed the floodplains of the Ganga.

Hooch: over 500 UP cops shifted

Aligarh (UP): In a major shake-up in the district police after the recent hooch tragedies, police have transferred over 500 of their men, an official said on Friday as the death toll in the second case rose to 9. Three more people who had consumed spurious liquor found dumped in a canal near Rohera village in Jawan area here have died, officials said. Another man died on Friday in the district's Kodiyagunj village and officials are linking it with the same stock of liquor found in the canal near Rohera village on June 2 by some brick kiln workers. 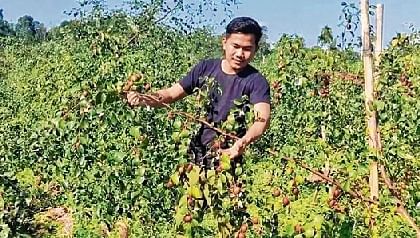 Agartala: Meet 32-year Bikramjit Chakma, who wants to cover the tropical hills of the northeastern state of Tripura with Kashmir’s famed 'ber apples'. As a pilot project, Chakma has cultivated the Kashmiri variety of the fruit on his 1.25 hectare and earned a net profit of Rs3.5 lakh in one season, winning accolades from the CM himself. Chakma, who hails from Pencharthal in Tripura’s North district, said he came to know about cultivation of 'ber apples' in neighbouring Bangladesh, and decided to try his luck with the fruit in his state, which has similar climatic conditions. "I saw on the internet that 'ber apples' are cultivated in abundance in Bangladesh with very good yields. So, I went ahead and bought 1,300 saplings from West Bengal at Rs 2.5 lakh and planted those in March last year, which were harvested in January. I earned Rs 6 lakh by selling the produce," he told PTI.