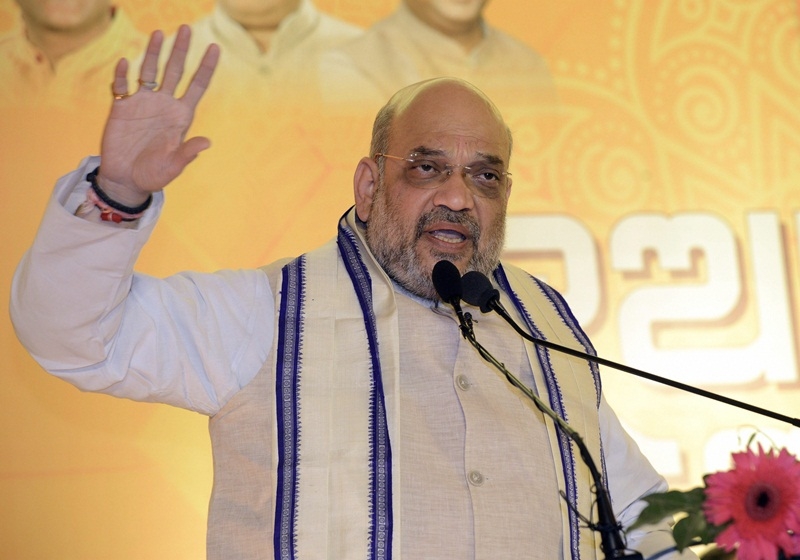 Jaipur: BJP president Amit Shah said Friday that his party’s policy is to reply with a bombshell if Pakistan fires a bullet, while the Congress just plays “Ilu-Ilu” with terrorists.

Shah borrowed the phrase from a Bollywood song – Ilu is an abbreviation for ‘I love you’ – at an election rally in Jalore, where he claimed that Congress president Rahul Gandhi was “disappointed” when the Indian Air Force struck a terror camp in Pakistan. “Rahul Baba, you do Ili-Ilu with terrorists. We don’t do that. Our policy is very clear,” he said. “Wahan se goli ayegi to yahan se gola jayega (If a bullet comes here, a shell lands there),” he said in Jalore.

Shah also held a roadshow in Jodhpur in support of BJP candidate Gajendra Singh Shekhawat. He urged people to bring the Modi government back to power. The Bharatiya Janata Party president was accompanied by former Rajasthan chief minister Vasundhara Raje. Shah claimed there was disappointment at Rahul Gandhi’s office when the IAF struck at Balakot in Pakistan after a terror strike in Kashmir. “The day when the entire country was cheering, distributing sweets, there was disappointment at two places. One, in Pakistan and the other, in Rahul Gandhi and company’s office,” he said in Jalore.

He targeted the Congress over the call in the Valley to revive the post of ‘Wazir-e-Azam’ in Jammu and Kashmir. “Their allies in Kashmir say that there should be a second prime minister. They want two prime ministers. Can there be two prime ministers in one country? Kashmir is an integral part of India and no one can separate it from India,” he said. The BJP chief said the 2019 Lok Sabha elections are about protecting the country’s honour, teaching a lesson to the terrorists and giving a befitting reply to Pakistan.

He said the Congress ruled for 55 years but only gave slogans in the name of removing poverty. Shah said he has come to the Jalore meeting after visiting 259 other locations and found there is support for Prime Minister Narendra Modi everywhere. “I have visited east, west, north and south of the country and only one slogan is common — Modi, Modi, Modi,” he said. “It has become a slogan of everyone in the country. The slogan is not just because of Modi’s popularity but also due to work done by the government under his leadership to win the people’s hearts,” he said.