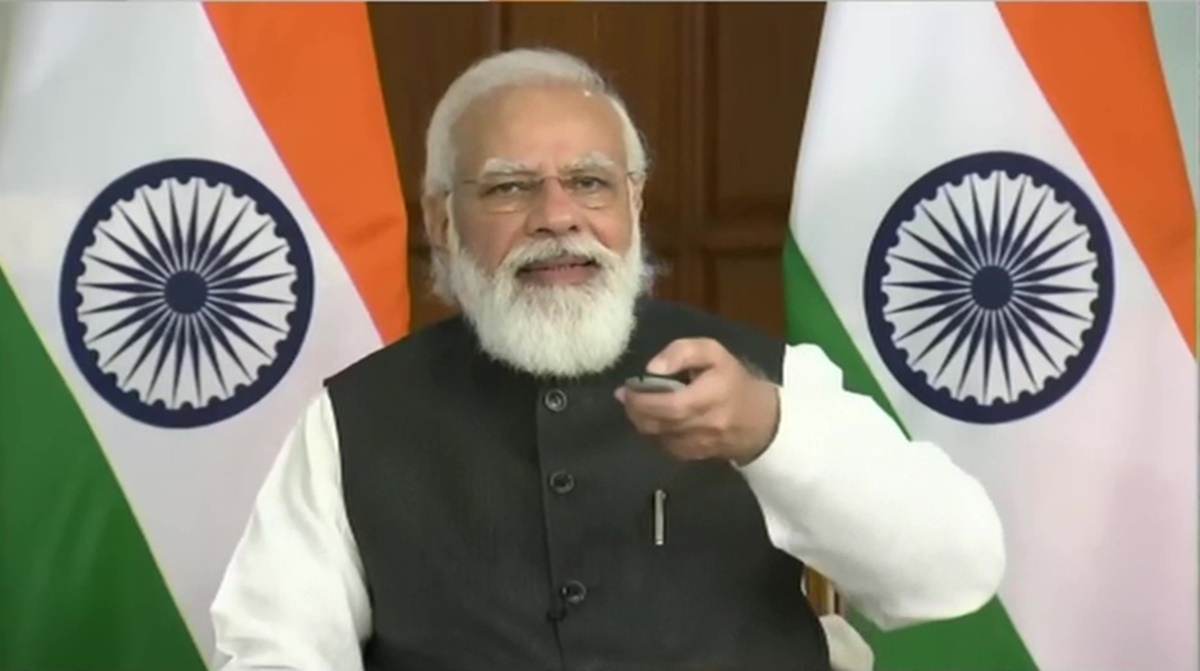 He also laid the foundation stone for four medical colleges in Banswara, Sirohi, Hanumangarh, and Dausa districts of Rajasthan today.

Brief video presentations on the medical colleges and institutes were shown in the programme.

While speaking at an event, after laying the foundation stone of four medical colleges in Banswara, Sirohi, Hanumangarh and Dausa districts of Rajasthan, PM Modi said that the Central government is working towards transforming the health sector of the country and is increasing its strength, self-reliance in the sector.

The Prime Minister informed that the Central government wants to ensure that every district in the country has at least one medical college or an institution that provides post-graduate medical education.

PM Modi said, "This pandemic has taught a lot in the health sector across the world. Every country is engaged in dealing with this crisis in its own way. India has resolved to increase its strength, self-reliance during this time. The beginning of work on four medical colleges in Rajasthan and CIPET-Jaipur is a key step in this regard."

"Since 2014, the Central government has approved 23 new medical colleges for Rajasthan. Out of this, seven medical colleges are already functional and we are laying the foundation for four of them today," he said.

The Prime Minister recalled that improving the health sector in Gujarat came as a challenge to him when he became the Chief Minister of Gujarat in 2001.

"From medical education to health infrastructure to medical facilities, we tried to change the situation," he said.

Listing the changes brought by his government in medical education, PM Modi stated that when the NDA-led government came to power in Centre in 2014, there were 82,000 undergraduate and post graduate seats in the medical college but the number stands at over 1.4 lakh now.

"We want to ensure that every district has at least one medical college or an institution that provides post-graduate medical education. We have made several reforms to ensure this in the last few years."

"The health system of our country was divided at several levels. There was a lack of connectivity and collective approach in health systems between states. There was a massive gap between primary healthcare and big hospitals. It was of paramount importance to remove these bottlenecks. To transform the medical system, we worked on a new medical system for the entire country. Initiatives such as Swachh Bharat, Ayushman Bharat and Ayushman Bharat Digital Mission are all part of that view," he added.

Speaking at the occasion, Om Birla lauded the PM Modi-led Central government for paying attention to the health infrastructure in the nation.

"The four medical colleges in Rajasthan will help in the development of the health infrastructure in the tribal areas of Rajasthan," Om Birla said.

Before the inauguration, Union Health Minister Mansukh Mandaviya had said: "PM Modi will be dedicating 4 medical colleges to Rajasthan today. Over 2000 students will get admissions in these medical colleges, extending better health facilities in Rajasthan. he will be inaugurating the Institute of Petrochemicals Technology."

According to a statement issued by the Prime Minister's Office on Wednesday, these medical colleges have been sanctioned under the centrally sponsored scheme for "the establishment of new medical colleges attached with district/ referral hospitals".

"Preference to set up medical colleges is given to underserved, backward and aspirational districts. Under three phases of the Scheme, 157 new medical colleges have been approved across the nation," the statement said.

The PMO informed that together with the Rajasthan government, the government of India has established CIPET: Institute of Petrochemicals Technology, Jaipur.

"It is self-sustainable and dedicatedly serves the needs of the petrochemical and allied industries. It will provide education to the youth to become skilled technical professionals," it added.