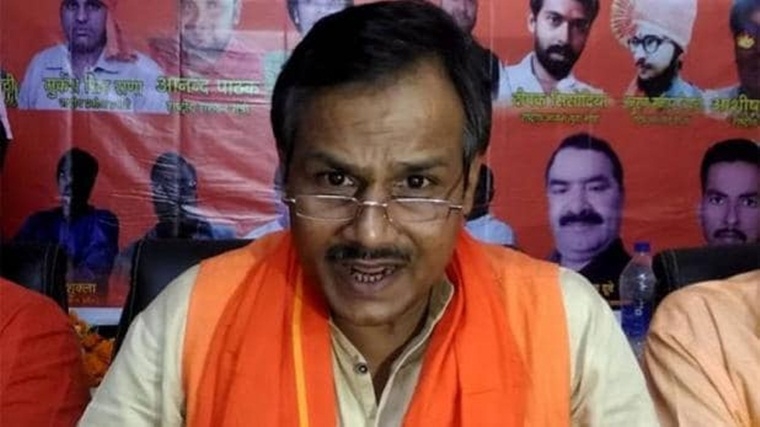 Lucknow: Uttar Pradesh Chief Minister Yogi Adityanath Wednesday asked officials to seek trial by a fast-track court of the main suspects in the murder of Hindutva outfit leader Kamlesh Tiwari, found in a pool of blood last week at his home here.

Ashfaq Sheikh (34) and Moinuddin Pathan (27), the two men who allegedly killed him, were arrested by the Gujarat anti-terror squad (ATS) on Tuesday evening.

The victim's body bore 15 stab or cut wounds and a gunshot injury, according to a post-mortem report.

Expressing satisfaction over the arrest of the two men, Tiwari's family called for capital punishment.

"I am very happy with the arrest of the killers. Now, they should be hanged," victim's mother Kusum Tiwari told reporters.

The chief minister directed officials that the main accused should be tried in a fast-track court, a UP government statement said.

Tiwari, 45, was found murdered at his home in Naka Hindola area of Lucknow last Friday.

He was shot once in the face and the bullet was embedded below his chin.

According to experts, it appears that the assailants first fired at Tiwari. They apparently tried to fire a second bullet but it got stuck in the pistol.

Tiwari was then repeatedly stabbed with a knife and another pointed object, the post-mortem report indicated.

The police have already recovered the pistol and the knife allegedly used by the two men arrested Tuesday by the Gujarat ATS near Shamlaji on the state's border with Rajasthan.

Preliminary interrogation revealed that they committed the crime "in retribution to the purported statements by Tiwari", an ATS release said in Ahmedabad.

Sheikh, a resident of the Limbayat area in Surat, used to work as a medical representative. Pathan, a resident of Umarwada, was employed as a food delivery boy.

"After committing the crime, the duo went to Nepal and then started their journey back to Gujarat after reaching Shahjahanpur (in Uttar Pradesh).

"Since they ran out of cash, the accused duo contacted their family members and acquaintances for more money. Based on technical and physical surveillance, they were eventually traced today evening," the release said on Tuesday.

Six men, including three from Surat and one from Nagpur in Maharashtra, have already been taken into custody in connection with the murder case.

The Surat link came to light after the UP police found a box of sweets, bearing the logo of "Dharti Sweets" located in the Udhna area of the diamond city, at Tiwari's home.

In a joint operation earlier, the UP police and the Gujarat ATS had arrested three other suspects in Surat. They were identified as Mohsin Shaikh, Faizan and Rashid Pathan.

A local court late on Tuesday night remanded the three men, alleged to be conspirators in the murder, to police and later judicial custody for a total of 14 days.

The UP ATS produced them at the home of Incharge Chief Judicial Magistrate Sudesh Kumar after flying them in from Surat on transit remand.

Meanwhile, a team of the Uttar Pradesh police landed in Surat on Tuesday to further probe the killing.