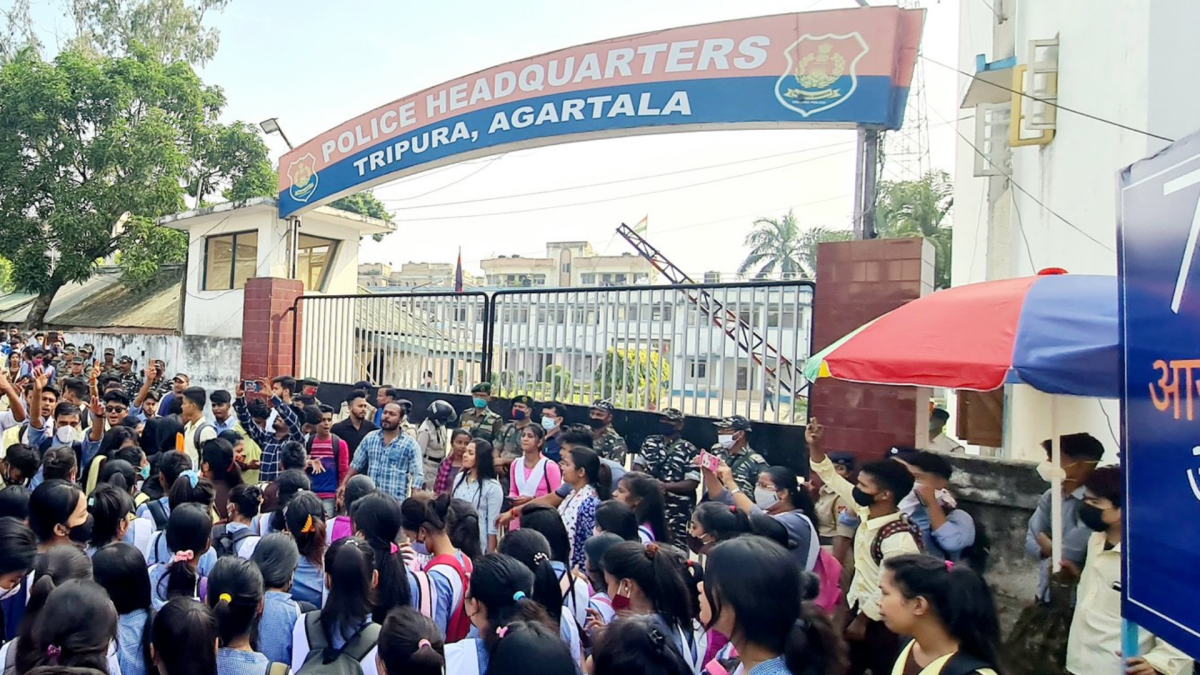 In the aftermath of Tripura police acting against 102 people including Supreme Court lawyers and rights activists based on their social media posts on alleged violence against minority places of worship in Tripura, the opposition Congress and CPI(M) as well as human rights bodies lambasted the state government.

The opposition Congress on Sunday demanded withdrawal of cases filed against those who have been booked including several Supreme Court lawyers for allegedly trying to "spread communal disharmony".

Tripura Pradesh Congress chief Birajit Sinha told PTI "the mosque at Panisagar was attacked by activists of VHP and houses of minority communities were vandalised by them... they should be arrested first. I do not think the lawyers, who visited the state, came with any bad intentions and did not spread any communal hatred. Government should immediately withdraw charges against them".

Inspector General of Police (IG), Law and Order, Arindam Nath however said, altogether complaints were lodged against 102 people and notices were served on four Supreme Court advocates and three others, that the police would like to clarify that filing FIR does not mean "they are guilty." "If those people have not said anything false or had no intention of spreading communal hatred or hatching any conspiracy, they should appear before police and clarify their position", Nath told PTI.

He at the same time added that it had to come to the police force's notice that many netizens even used fake identities and tried to spread communal hatred and police had rightly taken initiative to identify and book them under law.

"We have served notices to Twitter, Facebook and YouTube to freeze their accounts and inform us of all particulars of those persons to it", Nath said.

Notices were served on Estesham Hashmi, Supreme Court lawyer, advocate Amit Srivastav, coodinator of Lawyers for Democracy, NCHRO national secretary Ansar Indori and PUCL member Mukesh Kumar who had visited Tripura as part of a fact finding team. In the notice to the lawyers, the police had asked them to delete the social media posts and appear before investigators by November 10.

A mosque was vandalised and two shops were set ablaze at Chamtilla during the October 26 Vishva Hindu Parishad rally, which was called to protest against the communal violence in neighbouring Bangladesh. Three houses and a few shops, reportedly owned by Muslims, were also ransacked in nearby Rowa Bazar, the police said.

Tripura Minister for Information and Culture, Sushanta Chowdhury on Saturday said, "A group from outside with vested interests had hatched a conspiracy against the administration to create unrest in Tripura and malign its image by uploading fake photographs of a burning mosque on social media after the October 26 incident at Panisagar. Legal actions must be initiated against them" BJP spokesperson, Nabendu Bhattacharya added, "In the aftermath of attacks on Hindus in Bangladesh during Durga puja, a vested interest group was active to create communal disturbances in Tripura and in such a situation police cannot remain idle and so they started investigation. I am sure right to freedom of speech and expression was not infringed anyway" The Tripura Human Rights Organisation (THRO) however criticized the state government for serving notices to the Supreme Court advocates and stated that it was a move to silence the voice of democratic rights.

"The state government's action is highly condemnable. Those who perpetrated the violence are roaming freely, while the lawyers, who are also members of rights bodies who were trying to restore normalcy by bringing facts to light, were booked under stringent acts. It is not acceptable", THRO said.

The opposition CPI(M) in a statement said, after the attack on minorities in Bangladesh a group of people tried to foment communal tensions in different parts of the state.

"When some lawyers visited the state as fact finders, cases were registered against them, this is an act of intolerance. If they had done any illegal activity then normal law was enough to take actions against them, but applying such stringent acts (as the UAPA) against them is an instance of intolerance", the statement said.

The notice served on Facebook, Twitter and YouTube said, ".some persons/organization are publishing/posting distorted and objectionable news items/statements in Twitter regarding the recent clash and alleged attack upon mosques of Muslilm communities in the state." ...The posts have potential to flare up communal tension in Tripura state between people of different religious communities, which may result into communal riots".

The cases against the social media account holders were registered at West Agartala police station under IPC sections 153A (promoting disharmony or feelings of enemity), 153 B (imputations, assertions prejudicial to national integration), 469 (forgery), 471 (fraudulently or dishonestly using as genuine a forged document), 503 (threatening), 504 (intentional insult) and section 120B (criminal conspiracy) of the Indian Penal Code (IPC) and section 13 of the Unlawful Activities Prevention Act (UAPA).

The case against the four SC lawyers was registered at West Agartala police station on November 3 under various sections of IPC including 153 (a) and (b) related to promoting disharmony, enmity or feelings of hatred between different groups on the grounds of religion, race etc, 469, 504, 120 (b) (criminal conspiracy), besides section 13 of the Unlawful Activities (Prevention) Act. If convicted under the tough UAPA, an offender may face imprisonment up to seven years.