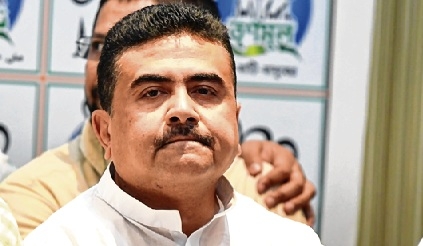 Suvendu Adhikari has been in news ever since three TMC heavyweight leaders Firhad Hakim, Madan Mitra, Subrata Mukherjee and one former minister Sovan Chatterjee was arrested over their involvement in Narada bribery case. No sooner than these leaders were arrested that the TMC cried foul against the turncoat leaders Suvendu Adhikari and Mukul Roy as they were also involved in the Narada bribery case. The CBI had immediately bought time saying that Suvendu and Mukul were MPs when the case broke out and hence they would need the nod of Lok Sabha Speaker to take action against them. However, in the case of the three TMC stalwarts, the Governor's nod was required as per the statue.

In another setback for Suvendu, recently, several BJP MLAs threatened to submit mass resignation if he was not removed from the post of Leader of Opposition in West Bengal Assembly, but the claim has been denied by the BJP West Bengal chief Dilip Ghosh.

In a recent development, an FIR was lodged against both Suvendu and his brother Soumendu as both are all­egedly involved in “stealing” relief material meant for cyclone Yaas through Suvendu’s central security personnel from a godown in Contai.

A day before this development, Rakhal Bera, a hotelier and a close aide of the BJP leader got arrested as he had allegedly duped several people of lakhs of rupees by promising them job in the irrigation department in 2019.

Notably, Suvendu Adhikari was the irrigation minister of West Bengal then.

Due to cyclone Yaas several dams or embankments were damaged making lives of thousands of people miserable in South 24 Parganas and East Midnapore.

Without naming anyone, West Bengal Chief Minister Mamata Banerjee had time-and-again slammed the irrigation department for not working properly and even charged them of misappropriation of funds in the name of work.

At a time when BJP leaders are claiming why Rakhal was arrested two years after his ‘dubious’ act, several poll analysts feel that since the CBI is not leaving any stone unturned to arrest the TMC leaders, it is a counter game of the ruling Trinamool Congress to catch hold of Suvendu once a close aide of CM Mamata.

Politics of badla? Revenge? Is it something we haven’t heard of? Not really. If the CBI went on to put three TMC stalwarts in trouble over a five-year-old case and during corona kaal, it was just a matter of time for the TMC and quite expectedly, they pulled out and dusted the old files pertaining to those close to Suvendu. It is now up to the BJP to decide if they want to continue with Suvendu as the LoP and the party’s main face as the opposition to the TMC or will the saffron party create new faces to take on the might of the TMC. The crucial civic polls is round the corner and the “cornered” BJP must get its act together and stand if it wants to create an imprint in the state.