HomeIndia'Section 144 should be imposed in Bhabanipur': Swapan Dasgupta after Dilip Ghosh pushed and heckled by alleged TMC supporters

'Section 144 should be imposed in Bhabanipur': Swapan Dasgupta after Dilip Ghosh pushed and heckled by alleged TMC supporters

'Section 144 should be imposed in Bhabanipur': Swapan Dasgupta after Dilip Ghosh pushed and heckled by alleged TMC supporters | ANI Photo
Follow us on

Bharatiya Janata Party (BJP) Rajya Sabha MP Swapan Dasgupta on Monday demanded the imposition of Section 144 in Bhabanipur. His comments came after a BJP delegation met the Chief Election Officer in Kolkata over the ruckus during the saffron party's campaign in which BJP national vice-president Dilip Ghosh was pushed and heckled by alleged TMC supporters.

"We demand Section 144 be imposed in the entire Bhabanipur till the election process is complete. CAPF, area domination personnel should be posted in and out of voting booths. CCTVs should be linked to EC," Swapan Dasgupta said. "MP Arjun Singh & national vice president Dilip Ghosh were assaulted, in order to spread an atmosphere of terror in Bhabanipur," he added.

Earlier, Ghosh was pushed and heckled in Bhabanipur assembly constituency, where West Bengal Chief Minister Mamata Banerjee is in the fray, provoking his security officer to whip out a pistol, as political temperature rose on the last day of electioneering.

The Election Commission has sought a report from the state government on the incident.

According to a PTI report, the incident occurred when Ghosh had gone inside a vaccination camp in Jodubabur Bazaar area in the constituency, where bypoll will be held on September 30. TMC supporters present at the spot shouted slogans demanding that he leave, alleging he was campaigning at a state-run vaccination programme.

Ghosh, who was whisked away by his security guards, later alleged TMC supporters "attacked" him without provocation and injured a BJP activist. "We will take up the issue with the Election Commission. What kind of election this is?" he asked.

Leader of the Opposition in the state assembly Suvendu Adhikari demanded that the Election Commission take action against those responsible for the incident. "The situation here is 'nazuk' (fragile). But BJP workers will fight till their last breath and not quit," he asserted.

Meanwhile, in a tweet, the TMC alleged that Ghosh's bodyguard had brandished firearms to scare away the people.

"@BJP4Bengal HITS A NEW LOW! How DARE a gun be aimed at (the) public in broad daylight? Do people not have the right to protest against leaders they do not support? Such blatant violation of human rights is shameful! This compromises the safety and security of people in Bhabanipur!" the party tweeted. 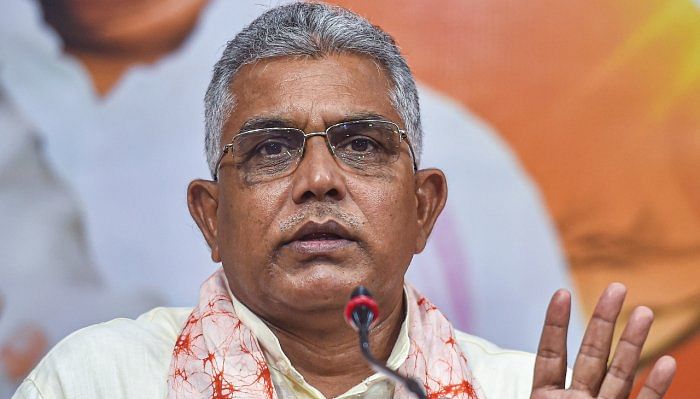