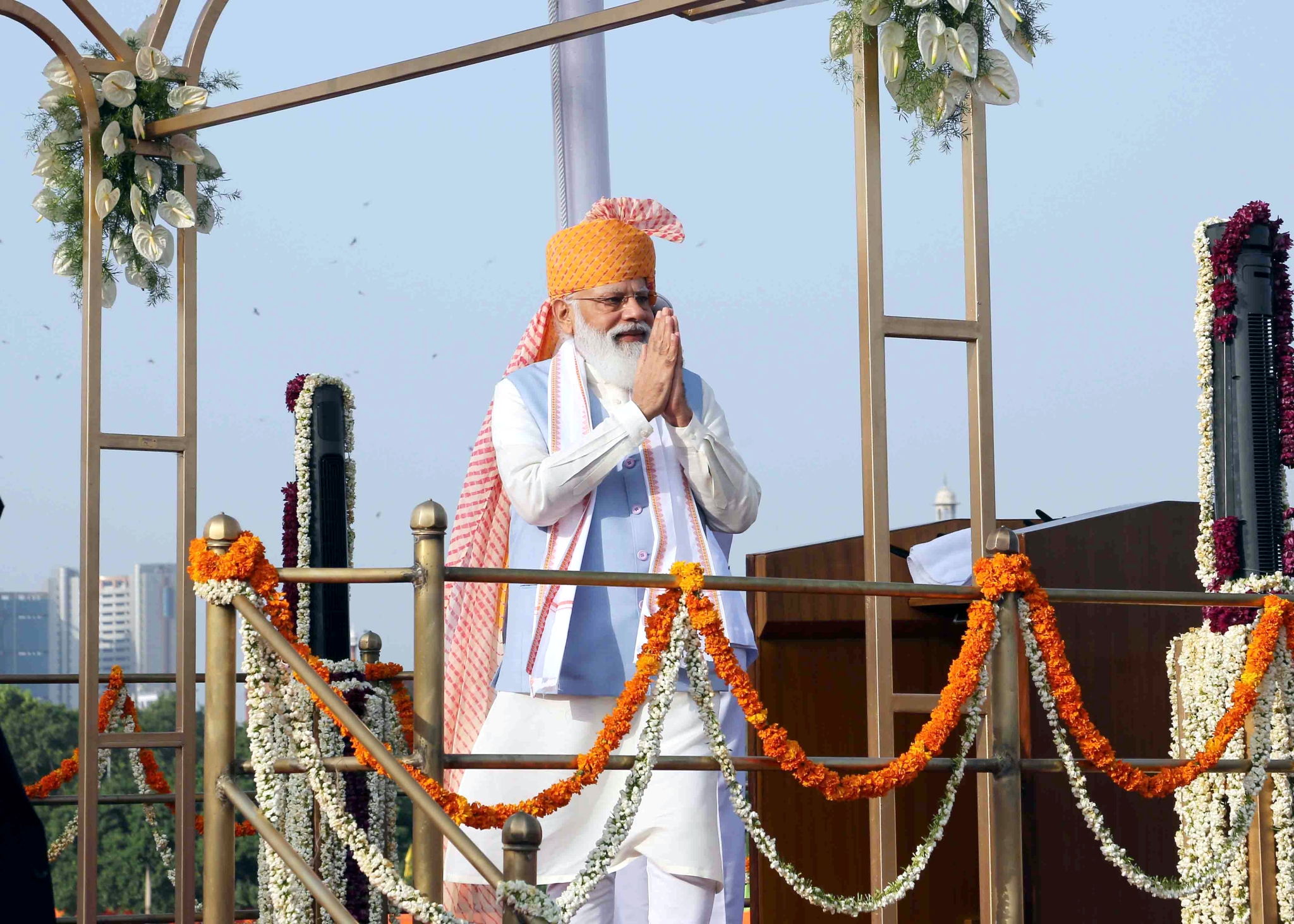 New Delhi: Outlining the roadmap for a new and assertive India, Prime Minister Narendra Modi on Sunday said it was time to move towards the goal of ‘saturated development.’

This would entail 100 per cent accomplishments with every village having roads, every family having a bank account, every eligible person having health insurance, card and gas connection.

Describing the next 25 year as "amrit kaal", when we need to extract the best in every field, he said the nation cannot wait forever to attain these goals, making it imperative for everyone to make a 'prayas' for this.

The new call – ‘sabka paryas’ – is expected to add gravitas to his oft-cited mantra of 'Sabka Saath, Sabka Vikas…’ as India makes rapid strides towards the goal of saturated development. To make this a tenable scenario, Modi also announced a slew of development programmes, including a landmark Rs. 100 lakh crore "Gatishakti" initiative to boost infrastructure and employment opportunities.

In his eighth consecutive address from the ramparts of Red Fort on the 75th Independence Day, Modi further called for making the next 25 years glorious, with "new thresholds, aspirations and dreams," in the run-up to the centenary of its independence from British colonial rule. "We have to ensure we meet our goal of building Aatmanirbhar Bharat when we celebrate 100 years of India's Independence," he stressed.

During his nearly 90-minute speech, the prime minister, who wore a traditional kurta and a churidar complemented by a blue jacket and a red-patterned saffron headgear, also called for a review of rules and procedures across the country so that every process that creates a hindrance for people and the country is removed.

Modi said the Rs. 100 lakh crore modernisation programmes will eventually lead to the development of future economic zones. He also announced the setting up of a National Hydrogen Mission to make India the new global hub of green carbon-free hydrogen fuel and its largest exporter, as he set a target of 2047 for India to achieve self-reliance in energy.

With Parliament restoring states' rights to make their own OBC lists, the PM said his government has ensured reservations for Dalits, backwards, tribals and the general category poor; he added that hand-holding of deprived communities is necessary.

In other announcements, Modi said the government will fortify the rice distributed to the poor via different schemes such as Midday Meal in a bid to address the problem of malnutrition. He also said 75 'Vande Bharat' trains will connect different parts of the country in 75 weeks to mark the ongoing 'Azadi ka Amrit Mahotsav'.

Articulating the philosophy of 'Chhota kisan bane desh ki shaan (small farmers should become India's pride)', Modi cited various schemes including transfer of money to assert that his government has prioritised the interest of small farmers who account for more than 80 per cent of the farming community.