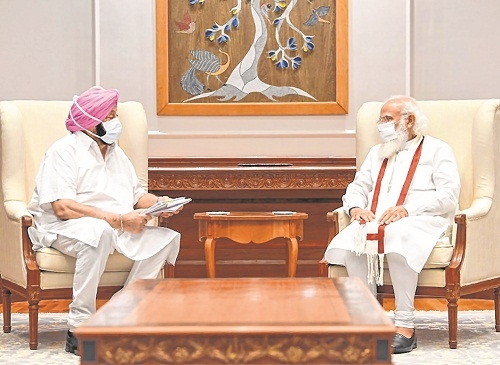 Punjab CM Amarinder Singh on Wednesday met Prime Minister Narendra Modi and urged him to immediately initiate steps for the repeal of the controversial farm laws.

He also sought amendment to the relevant law for including farmers in free legal aid category, the chief minister's office said.

The Punjab CM, who called on the prime minister here late this evening, submitted two separate letters, called for the immediate review and revocation of the three farm laws that have triggered widespread resentment among farmers of Punjab and other states.

The chief minister said the farmers' agitation had the potential of posing security threats to Punjab and the country with Pakistan-backed anti-India forces looking to exploit the farmers' discontent with the government, an official statement said.

He called for the prime minister's intervention for the expeditious redress of the concerns of farmers.

He said the Government of India should explore an enduring solution to end the continued agitation as it was not only impacting economic activities in Punjab but also had the potential to affect the social fabric, especially when political parties and groups take strong positions.

Amarinder Singh noted that he had earlier too sought the prime minister's appointment for a meeting with an all-party delegation from Punjab, his office said.