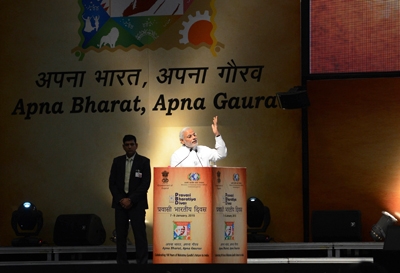 PM Narendra Modi Speaking During The Second Day Of The Pravasi Bhartiya Divas Summit In Gandhinagar On Thursday. |

Gandhinagar : Celebrating centenary year of non-resident Gandhi’s return to the country, Prime Minister Narendra Modi on Thursday urged the Indian diaspora across the globe to rise as a force for humanity and for India.

“Gandhi returned to free the country from foreign yoke. Today, I invite you to unleash your global potential for the cause of a rising India”, he said.

Delivering the inaugural address at the 13th Pravasi Bhartiya Diwas in Gandhinagar on Thursday the PM said that Indians travelled across the world in search of knowledge, opportunity and gains, but it is time for NRIs settled across 200 countries of the world to look Indiawards. “I am a man of my words and have kept my promise. It is payback time for you who are global force to reckon with if you combine in the interest of your motherland”, he added.

Modi was referring to the slew of pre-poll promises and their fulfillment by his government, which included visa-on-arrival facility such as lifelong visa for PIO cardholders, merging of PIO and OCI schemes, visa on arrival for 43 countries, and electronic travel authorisation.

He made a pointed mention of the project ‘Namami Gange’ to clean to clean the River Ganga, seeking the contribution of the NRI community in every manner possible whether through knowledge, expertise or skills. “Whatever be your field of interest, there are ample opportunities to contribute in this gigantic and sacred task, which in numerical terms means touching the lives of 40% of the country’s population nestling on its banks covering 120 cities and 6000 villages besides numerous sacred places Gangotri, Jamnotri, Haridwar and Kashi.

“If a mere replica of the Ganga in the shape of a lake called Gangasagar is the central force binding Mauritius, we the possessor of the mother figure need to do much better. It amounts to a better economic life for 40% of the country’s population”, he added.

The Prime Minister welcomed the dignitaries from Guyana, South Africa and Mauritius. He recalled how Indian festivals such as Holi and Diwali are enthusiastically celebrated in Guyana. He recalled that – January 8th was the founding day of the African National Congress in South Africa. He mentioned that Mahatma Gandhi’s birth anniversary, October 2 is observed in Mauritius with even greater vigour than it is observed in India.

He urged NRIs across the world to forge and take pride in a common identity and heritage, and to use this strength collectively.

I have met representatives of 50 countries since assuming office, and say that all nations across the world are eager to partner India to meet common goals. “A case in point is how a record 177 nations out of 193, had co-sponsored India`s resolution on International Day of Yoga at the United Nations”, he added.

Minister for External and Overseas Indian Affairs, Sushma Swaraj said that the 25 million strong Indian diaspora has become a unique force in the world culture and the  government was keen to work closely with them. “Partner with India  and I promise, it will be a mutually rewarding experience”, she added.