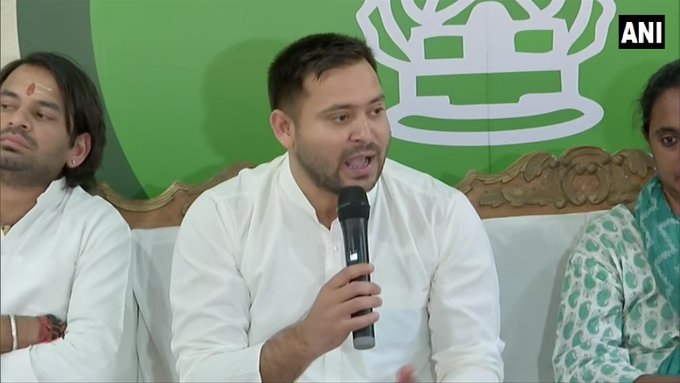 Political turmoil continues in Bihar over the liquor ban with Leader of Opposition and RJD leader Tejashwi Yadav putting allegation against Chief Minister Nitish Kumar and said that the state ministers are involved in the liquor trade.

Speaking to the media, the RJD leader said, "The people who sit near Chief Minister Nitish Kumar are engaged in this work. How many MLAs, how many ministers are engaged in this, everyone knows who they are. From whom is the government asking? Why don't you go and investigate yourself?" His remark came in response to the allegations of Janata Dal United (JDU) in which the ministers had said that if Tejashwi Yadav has any evidence of liquor being sold in Bihar then he should provide it to the government.

The Leader of the opposition further alleged that the liquor ban in Bihar is just a hoax.

Further, taking a jibe at the JD(U)'s special programmes on November 24 on the occasion of completing 16 years of Nitish Kumar's good governance, Yadav said, "In which case has Bihar become unmatched? In unemployment, in liquor ban, in crime rate, education is ruined in that case, dogs roaming in hospital, not a single factory was set up in 15 years, there is flood and drought in Bihar," he said.

While talking on the repeal of three farm laws, he said, "The fight for Minimum Support Prices (MSP) continues. The central government should focus on that. The farmers are asking for guarantee on MSP and government should provide that. I also appeal to the Centre to provide 25 lakhs to the kin of the farmers who died during the protest and a job. The Bihar government should also give Rs 5 lakhs to the farmer's family." A total of 32 people died in the state after consuming spurious liquor, the recent death being reported from Muzaffarpur.

Nitish Kumar had also said that the crime rate in Bihar has come down after the liquor ban and he stands against liquor.