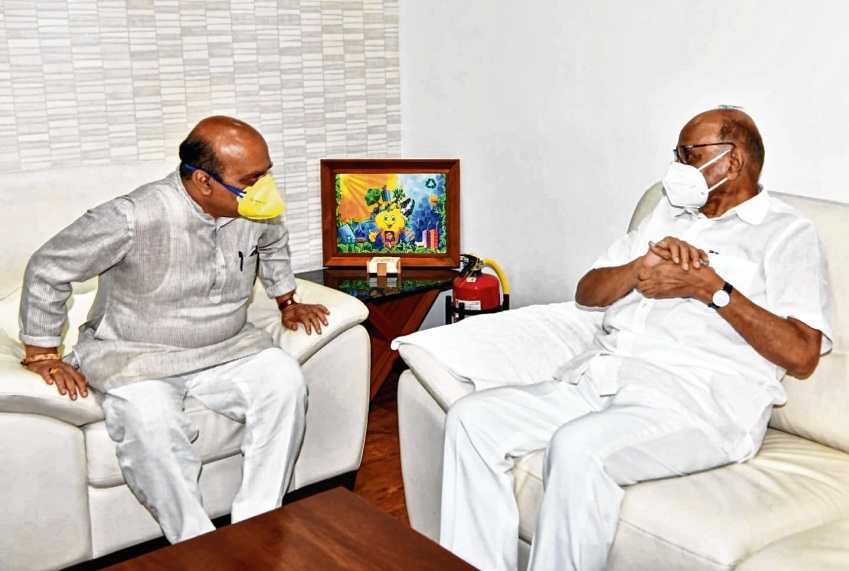 The Nationalist Congress Party Chief Sharad Pawar on Friday met the Karnataka Chief Minister Basavraj Bommai at Bangalore and hoped that Maharashtra and Karnataka would continue to work together with a cooperative vision in the years to come.

On the other hand, state NCP chief and Maharashtra Water Resources Minister Jayant Patil also met Bommai and thanked him for the cooperation extended by the Karnataka Government during the Maharashtra floods especially in Satara, Sangli and Kolhapur districts and the Konkan region.

Pawar tweeted, “On my visit to Bangalore, I got a call from Karnatak CM Shri Bommai who expressed his wish to meet me. Keeping the respect of his position in mind, I decided to go and pay a courtesy call on him. I am thankful for his warm hospitality and hoping that the two states would continue to work together with a Cooperative vision in the years to come.’’

Patil, who had recently met the former Karnataka CM BS Yeddyurappa in the presence of Bommai on increasing cooperation between the two states on water issues, thanked the new CM for his government’s cooperation in handling the recent floods.

“I thanked him for the cooperation extended by the Karnataka Government during the Maharashtra floods. Unprecedented coordination of dam management between the two states averted the huge loss of life and property,’’ said Patil after his meeting.

“We also discussed further cooperation especially when the weather bureau has predicted heavy rains between August 13 and 20,’’ said Patil.

In June, the two states agreed for the formation of a 3-tier interstate flood coordination committee comprising minister-, secretary- and field-levels with SOPs and preparedness to share real time data and ensure early warning on releases. Both the secretaries will ensure its smooth operation 24/7. Both the governments decided two-pronged strategies for Bhima sub-basin. First, monitoring rainfall in dam catchment of Ujani and judiciously deciding on incremental releases to give sufficient warning to Karnataka. Second, monitoring rainfall in free catchment areas and endeavour to share information as quickly as possible.

Friday’s meetings by Pawar and Patil with Bommai assume significance especially when the two states were recently engaged in a verbal duel over the long-pending Maharashtra-Karnataka border dispute. NCP insiders pointed out with Bommai as the CM the dialogue between the states will be smooth as he is not a hardliner. —Sanjay.jog@fpj.co.in