One more drugs seizure in Gujarat, this time it’s worth Rs 600 cr 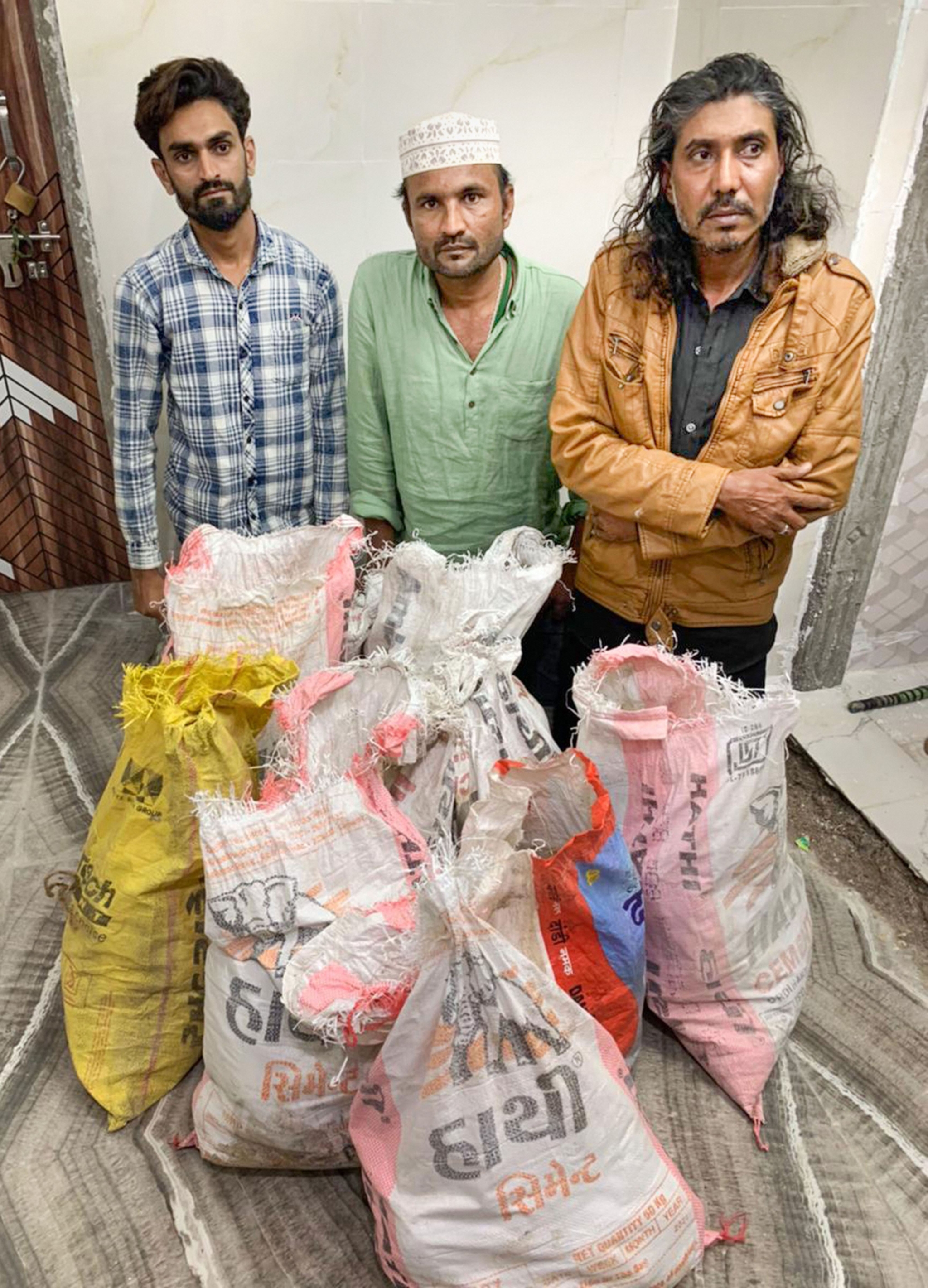 Ahmedabad: In one more major drug bust in Saurashtra region in Gujarat, the Anti-Terrorists Squad (ATS) of the State Police seized 120kg of heroin worth a whopping Rs 600 crore from Zinjhuda village of Morbi district in an operation through Sunday night. Three people were arrested.

Disclosing the details, Gujarat’s Director-General of Police Ashish Bhatia told mediapersons that the ATS and the local police raided an under-construction house of Shamsuddin Husseinmiya Saiyyed alias Pirzada Bapu, in the Zinjhuda village and recovered the consignment.

Two others were identified as, Mukhtar Hussein alias Jabbar Jodiya, a resident of Jodiya in Jamnagar, and Ghulam Hussain Umar Bhagad, who hails from Salaya in Devbhumi Dwarka.

This comes less than a week after the Gujarat police on November 10 arrested a vegetable vendor from Maharashtra with 19 packets containing more than 17 kg heroin and methamphetamine, cumulatively worth Rs 88.25 crore, in Devbhumi Dwarka district.

His interrogation led the police to recover as many as 47 other similar packets from the home of two brothers in Salaya coastal town in the same district. After the forensic experts subsequently confirmed that these 47 packets too had narcotics, the value of the total seizure crossed Rs 300 crore mark.

With Sunday’s seizure, the State police have recovered narcotics worth over Rs 900 crore in less than a week. In September, some 3,000 kg drugs consignment worth over Rs 20,000 crore was seized from the privately-owned Mundra Port in Kutch district.

ATS DIG Himanshu Shukla told reporters that his agency had seized drugs worth Rs 1,320 crore during the last one year alone. He added that drugs were entering India from Afghanistan and Pakistan.

According to DGP Bhatia, a preliminary investigation in the Morbi seizure has revealed that the consignment was brought by Jabbar and Ghulam Bhagad via sea and the delivery was received from a Pakistani boat.

He said the consignment was sent by one Zahid Bashir Baloch from Pakistan. Baloch is wanted in an earlier seizure of 227kg of heroin carried out by the Directorate of Revenue Intelligence in 2019.

The ATS has ascertained that Isa Rav, Jabbar’s brother, was in touch with Baloch and had coordinated to receive the consignment by sea.

He said the narcotics were mostly delivered in the last week of October. The consignment was initially hidden in the coastal region near Salaya and was then moved to this village from where it was seized.

The DGP informed that the conspiracy was hatched in Somali Canteen in the United Arab Emirates. He said this consignment was to be handed over to the Indian smugglers to be transported to an African country.

But the three arrested persons had planned to misappropriate the consignment intended for Africa and divert it to India to sell the stuff in the country.

Police said Jabbar was a notorious smuggler with close connections to various international cartels. Bhatia said he had been apprehended by the Pakistan Maritime Security Agency last year when he had docked his boat in Karachi, Pakistan, citing “engine problems.” He was then let off by the Pakistani agencies.

Explaining the modus operandi, the DGP said drug cartels from Pakistan smuggle heroin into India through the Gujarat coast. In the past few years, there have been several attempts by these cartels to use the Gujarat coast due to its proximity to Pakistan as a landing point for heroin.

He said the Pakistani and Iranian heroin smugglers would deliver the stuff to their Indian counterparts at the Indo-Pak International Maritime Boundary Line.

Bhatia claimed that the Gujarat Police had successfully neutralised all such attempts, and all the consignments sent by these cartels have been seized and the accused persons arrested.

Interrogations and investigations have also revealed that various geopolitical reasons are responsible for this surge in the attempts made via the Gujarat coast, according to the police chief.