On camera: Bihar thief dangles on train's window for over 10 km as passengers grab arms

The thief's plan failed after an alert passenger grabbed his arm instead.

In a worst nightmare for any thief, a man trying to snatch a mobile phone from a train passenger through the window was left hanging outside, apologising, as passengers pulled his arms in, helping him live, but also scolding him.

In a video that has surfaced on social media is reportedly from Bihar where such snatching incidents are common.

According to NDTV report, the train in the video was nearing the end of its journey from Begusarai to Khagaria when the thief made an attempt to steal near Sahebpur Kamal station. However, his plan failed after an alert passenger grabbed his arm instead.

Here's a video shared by a journalist:

As the train moved, he pleaded to be let go, and eventually slid his other arm in through the window rails for the passengers to hold him afloat.

For over 10 kms he was afloat and was finally let go when the train was close to Khagaria.

No information was yet available on whether the police took any action.

Notably a similar snatching incident happened in June which ended up in serious injury to a policewoman as she was pulled out of a moving train near the Katihar railway station, also in Bihar.

Aarti Kumari, a police constable posted in Nawada, was standing close to the door with her mobile phone in hand when the train slowed down near the station and the snatchers struck. She resisted, at which the men pulled her out. 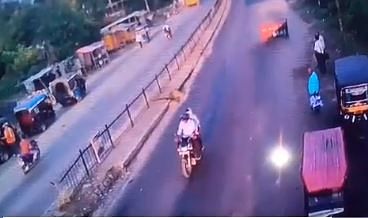