She alleged that ants were on the eyes of the deceased and also all over his body.

Relatives of a 22-year-old man, who died of TB at a state-run hospital in Solapur city in Maharashtra, on Tuesday claimed that ants were found crawling all over his body in the hospital ward.

A senior hospital official said that prima facie ants were crawling on the bed of the patient as per nurses. An inquiry has been ordered into the incident.

The deceased, Rakesh More, was admitted to the government-run hospital as he was suffering from disseminated tuberculosis on February 8. He died on Sunday afternoon.

"Hospital authorities called us around 3 PM on Sunday and informed us about Rakesh More's death. When our relatives went to the hospital ward there were no ants on his body, but by 4.30 PM, when our family members reached the ward to receive the body, they found that there were ants all over his body," the aunt of the deceased claimed.

She alleged that ants were on the eyes of the deceased and also all over his body.

"When my son-in-law informed about ants to the nurse, she told him to move the body from the ward as there were other patients admitted there. We insisted them clean the body but they did not pay any heed," she alleged.

Dr Shakira Sawaskar, the officiating dean of the hospital, said an inquiry has been ordered.

"This patient was treated at the hospital since February 8. He died around 3.30 pm on Sunday. His relatives were already informed that he was in critical condition. The relatives came around 4.15 pm. They informed us that they will arrange for the ambulance and will move the body," she said.

Dr Sawaskar also said that the body could have been shifted to the mortuary but since a mandatory form to move the corpse to the hospital mortuary was not signed by the patient's relatives the body remained in the ward till 6 PM.

"At 6 pm, the family members told us that since some relatives would be coming from Pune, they would take possession of the body the next day and then the body was moved to the hospital morgue," she added.

"It was a fact that there were ants, but as per nurses at the hospital, they were not crawling on the body of the patient but they were on his bed," Dr Sawaskar said.

The officiating dean, however, also said that there is the possibility that ants could be on the body of the patient as it was kept in the hospital ward for a long time.

"The patient was given milk through the feeding pipe, so there is a possibility that drops of milk fell here and there on the bed and that may have attracted ants. Also, ants could already be there in the hospital ward as patients eat their food and leftover is generally spread all over," the officiating dean said.

"I will order an inquiry into this incident. We will make sure that within 30 minutes of the death of any patient, the body is shifted to the mortuary," she added. 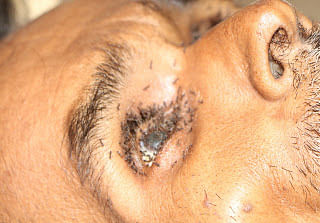