Sami was one of the 118 people whose names were announced on Saturday for the Padma Shri awards, with the Ministry of Home Affairs list showing his home state as Maharashtra.
PTI 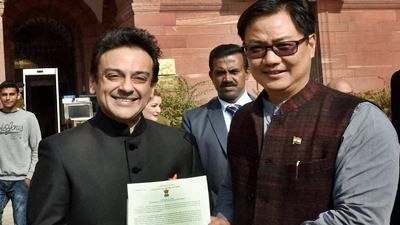 New Delhi: Noted singer and musician Adnan Sami with Minister of State for Home Affairs, Kiren Rijiju showing the Certificate of Indian Citizenship by Naturalization presented to him, in New Delhi on Friday. | PTI Photo by Kamal Singh

New Delhi: The Congress on Sunday hit out at the Modi government over bestowing the Padma Shri on singer-musician Adnan Sami and asked why Kargil War veteran Mohmmad Sannaullah was declared a foreigner through the NRC for Assam, while the son of a Pakistan Air Force pilot has been conferred with one of India's highest civilian honour.

Sami was one of the 118 people whose names were announced on Saturday for the Padma Shri awards, with the Ministry of Home Affairs list showing his home state as Maharashtra.

Sami, born in London to a Pakistani Air force veteran, applied for Indian citizenship in 2015 and became a citizen of the country in January 2016.

Hitting out at the Centre, Congress spokesperson Jaiveer Shergill said, "Kargil War veteran and retired army officer Mohammad Sanaullah who fought for India declared 'foreigner' after NRC and Adnan Sami whose family fought against India honoured with Padma Shri -- This is the magic of NRC and government chamchagiri!"

He also posed questions to the government over the issue, asking why an Indian soldier like Sannaullah is declared a foreigner via the National Register of Citizens (NRC) for Assam and the son a of Pakistan Air Force pilot is given the Padma Shri. 'Grateful that i got to live my dream': Former Indian pacer Zaheer Khan drops heartfelt message...

"Congratulations to all Padma Awardees. I am very happy that Adnan Sami famous singer and musician and Pakistani Muslim immigrant has also been given Padma Shri," Singh tweeted.

"The Indian government had full rights to give citizenship to anyone from any religion who sought Indian Citizenship, then why CAB/CAA? Just to polarise Indian Polity further. What would GOI do now if any Muslim of Eminence if prosecuted in Pak Afghanistan or Bangladesh seeks Indian Citizenship?" Singh said.