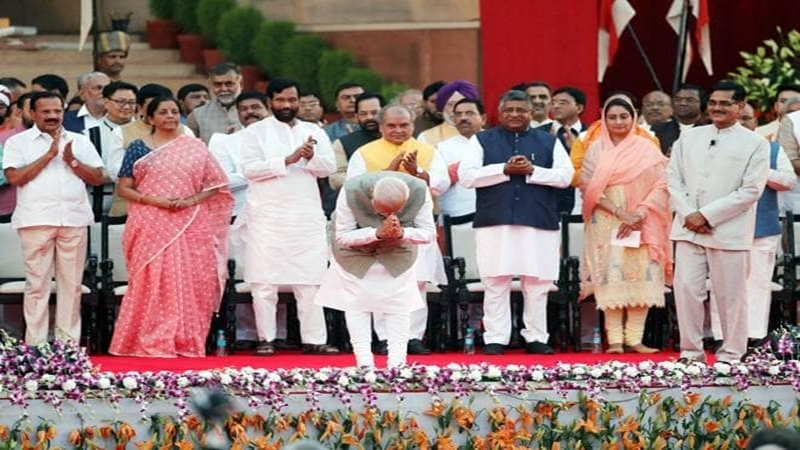 President Ram Nath Kovind administered the oath of office and secrecy at a grand function which was attended by Heads and representatives from BIMSTEC countries, besides Prime Minister of Mauritius and President of Kyrgyzstan. Overseas friends of the party from 15 countries including the US, Australia, Germany, and the UK, were also invited.

Capping a landslide victory in the Lok Sabha elections, Narendra Modi, along with his Councils of Minister on Thursday took oath as the 15th Prime Minister of India in the forecourt of the Rashtrapati Bhavan.

Riding high on the planks of muscular nationalism and anti-Congress, BJP, which had won 282 seats in 2014, improved its tally by notching up 303 seats. Along with its NDA allies, the number swelled to 353 in the 543-member Lower House of the Parliament.

Over 8,000 guests attended the swearing-in ceremony of Prime Minister Narendra Modi at Rashtrapati Bhavan today. Apart from the leaders of BIMSTEC countries, including Bangladesh, Myanmar, Sri Lanka, Thailand, Nepal and Bhutan, heads of the states from Kyrgyzstan and Mauritius graced the ceremony touted as the biggest ever event that to be held at Rashtrapati Bhavan. Modi’s swearing-in ceremony in 2014 was attended by around 5,000 people. This time too, the swearing-in ceremony took place at the forecourt of Rashtrapati Bhavan at 7 PM. After that, the guests will be treated with high tea and snacks including samosas, paneer items and sweets. President Ram Nath Kovind will also host a dinner — with both vegetarian and non-vegetarian options — for the foreign leaders. The dinner will also be attended by Prime Minister Modi and other top leaders of the country. The leaders from the opposition parties, chief ministers of different states, ambassadors, diplomats and celebrities from Bollywood will also attend the event.