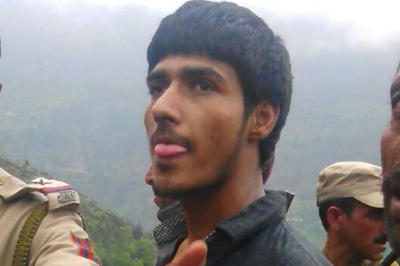 New Delhi : Even as Pakistan officially denied that terrorist Mohammad Naved aka Usman Khan nabbed by civilians in Udhampur on Thursday is their citizen, his father Mohammad Yakub has confirmed to a section of the Indian media that his son is an LeT operative.

The Pakistani media had downplayed the incident today, and then an official spokesperson said: We have seen media reports and cannot respond on that basis. We expect the Indian authorities to share information on claims being made in the media.” It was claimed on behalf of the Pakistan”s National Database and Registration Authority (NADRA) that their records have revealed that Naved was not their national. Pakistani officials termed India”s claims of Naved being a resident of Faisalabad in Pakistan as “unwarranted and unsubstantiated””.

In the Lok Sabha, Union Home Minister Rajnath Singh reiterated Mohammed Naved came from across the border. Naved told security forces he was a resident of Ghulam Muhammada bad area of Faisalabad city in Pakistan”s Punjab province after he was captured following a deadly ambush on a Border Security Force convoy in Jammu and Kashmir that left two troopers dead and eight others injured.

Singh told both houses of Parliament that security forces neutralised eight terrorists last month and foiled four infiltration attempts. “We strongly condemn the attack and the persistent attempts by terrorists from across the border to vitiate the peaceful atmosphere in Jammu and Kashmir,” he said.

“Two militants attacked a BSF convoy in Udhampur in Jammu on Wednesday. Two jawans were killed and eight were injured in the attack. A militant has been killed in gunbattle and another has been captured alive by the help of locals,” said the Home Minister.  Rajnath Singh also said that the captured terrorist belongs to Pakistan. “The arrested terrorist has revealed his name to be Mohammed Naved alias Usman. He has said he is from Faisalabad, Pakistan,” said Rajnath Singh. He also praised the efforts of locals who helped the Indian forces to nab the terrorist alive. “We appreciate the efforts made by the villagers who helped in nabbing the militant without caring for their lives. We will request the State Govts to reward them (villagers) for their bravery. We salute the courage of our Jawans and will honour them with gallantry awards,” said Singh.

Jammu : The terrorists who struck in Udhampur on Wednesday were backed by Pakistan’s Inter-Services Intelligence (ISI) and sent to wage war against India, Jammu and Kashmir police said on Thursday.

This is what the police said in its preliminary report submitted to Udhampur District Magistrate Shahid Iqbal Choudhary. “During the course of preliminary investigation, it transpired that the terrorists involved in the attack are trained ‘fidayeens’ and backed by Pakistan’s ISI in order to wage war against the government of India,” it said.  Giving details of the attack in which two BSF personnel and one terrorist were killed, the police said an FIR has been registered under various sections of Ranbir Penal Code, Arms Act and Unlawful Activities Prevention Act.  One of the two Pakistani terrorists was caught alive and he is being interrogated.