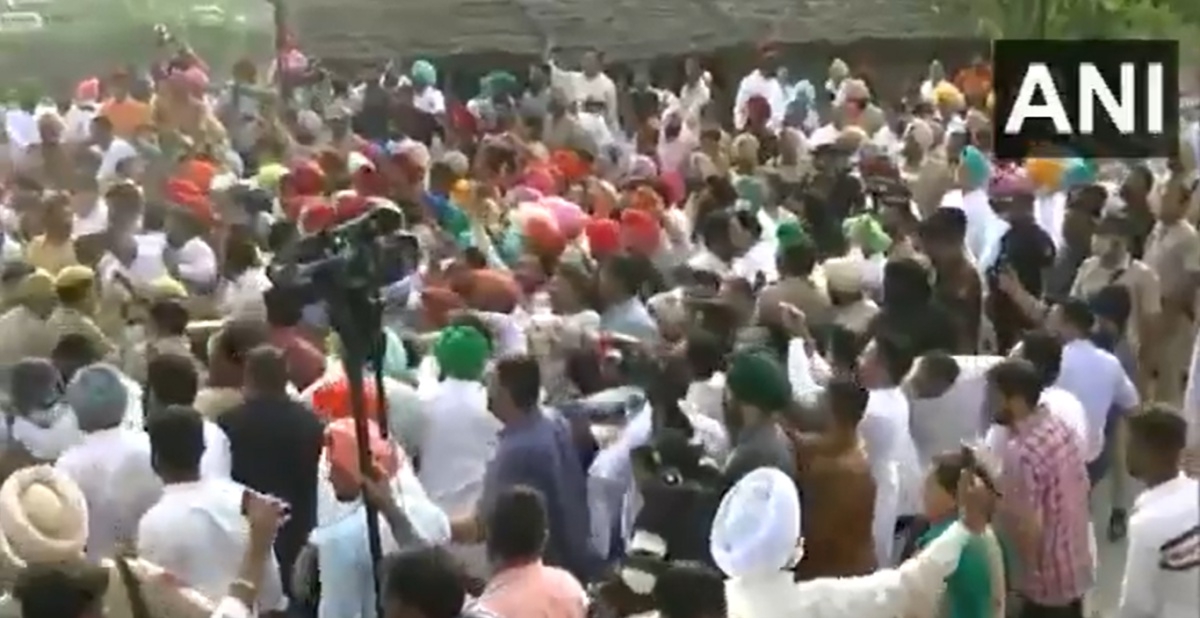 Punjab Congress chief Navjot Singh who on Thursday led a protest march from Punjab to Lakhimpur Kheri in protest against the killing of farmers in Lakhimpur Kheri was stopped at Yamuna Nagar (Haryana)- Saharanpur (Uttar Pradesh) border. The police officials at the border stopped all the leaders including Sidhu from entering Uttar Pradesh.

In a video shared by the news Agency ANI, the Congress leaders clashed with the police officials.

Meanwhile, Navjot Singh Sidhu has demanded the arrest of Union Minister Ajay Kumar Mishra's son in the violent incident saying he would go on hunger strike if action is not taken against him by Friday. Union Minister of State for Home Mishra's son has been booked for allegedly mowing down four farmers in Lakhimpur Kheri on Sunday.

However, Mishra has denied allegations about his son's involvement in the case.

Chief Minister Charanjit Singh Channi also joined Sidhu for a brief period when the march was about to start. Sidhu had resigned from the post of Punjab Congress chief on September 28 but it wasn't immediately clear if the resignation was withdrawn.

Before the protest march Thursday, Sidhu slammed the BJP-led government in UP over the Lakhimpur Kheri incident.

He said Punjab Congress and party MLAs are standing firmly with the farmers. He asked why UP authorities hadn't taken action against Mishra's son even after an FIR was lodged in the matter.

Four of the eight people who died in Sunday's violence in Lakhimpur Kheri were farmers, allegedly knocked down by vehicles driven by BJP workers travelling to welcome UP Deputy Chief Minister Keshav Prasad Maurya to an event in the area.

Two BJP workers, Mishra's driver, and Raman Kashyap, a journalist working for a private TV channel, were also killed in the incident.

While the first three were allegedly lynched by agitating farmers, the scribe, according to his father, died after being hit by a vehicle when he was covering farmers' protest against Maurya's visit to Mishra's native place.

No arrests have been made in connection with the case so far.