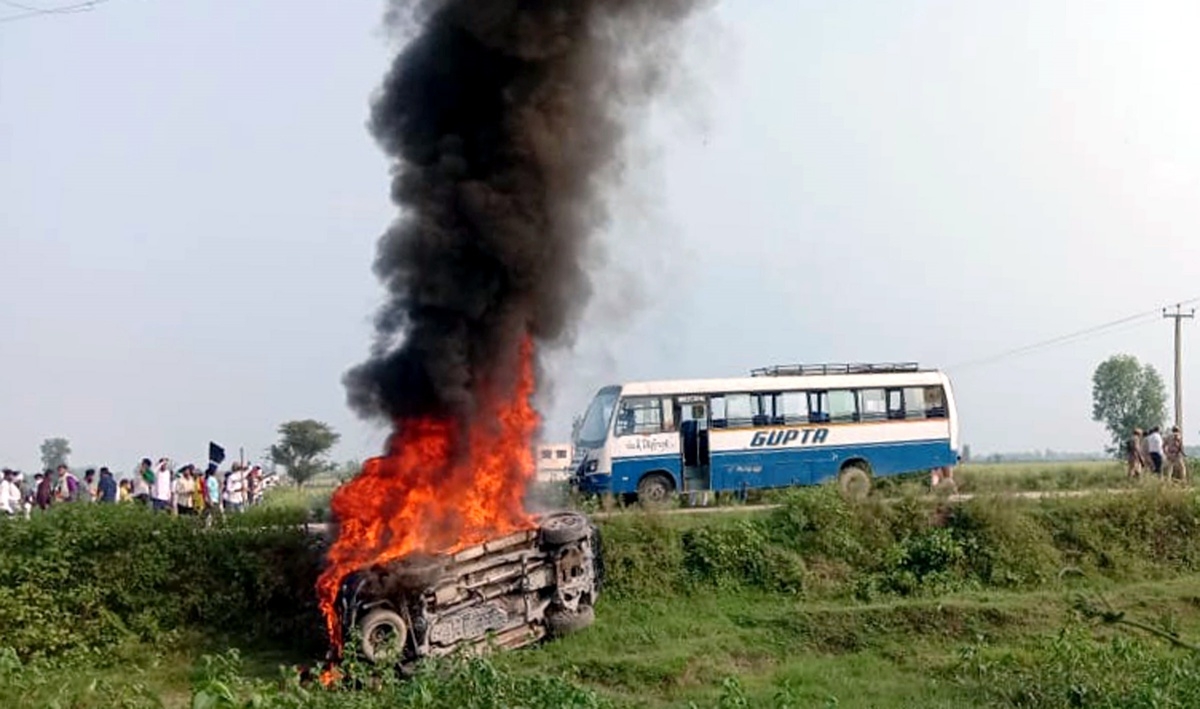 The Samyukta Kisan Morcha on Sunday claimed that one of the three farmers was shot dead by Ajay Mishra Teni's son, Ashish (Monu) Mishra, while the others have been allegedly run over by vehicles in UP's Lakhimpur Kheri. Today, six people were killed as violence erupted here during a farmers' protest over Uttar Pradesh Deputy Chief Minister Keshav Prasad Maurya's visit.

After Ashish Mishra's car hit the protestors, two SUVs were set on fire by angry farmers. The vehicle of union minister’s son Monu was burnt along with few others by the agitated mob. The BKU leader Rakesh Tikait has rushed for Lakhimpur from Delhi border after hearing about the incident.

Four of the dead were travelling in the vehicles and the remaining two were farmers, sources said. The violence broke out after two SUVs allegedly ran over over a group of anti-farm law protesters, who were demonstrating against the visit of Deputy Chief Minister Keshav Prasad Maurya at the Tikonia-Banbirpur road here.

Angry protesters allegedly forced the two vehicles to stop and set them on fire.

Samyukta Kisan Morcha claimed that one of the three farmers was shot dead by MoS Ajay Mishra Teni's son, Ashish (Monu) Mishra, while the others have been allegedly run over by vehicles in Lakhimpur Kheri

Notably, the farmers in the Lakhimpur area have been agitating against farm laws for quite some time. A large number of farmers from this district have been taking part in the agitations at Delhi border also.

The chief minister Yogi Adityanath has cancelled all his programmes on Sunday and returned to state capital. The UP CM is taking review of the situation. Sensing trouble the state government has sent Additional Director General (ADG), Police, Prashant Kumar on the spot. To control the mob, heavy police force was sent to the area along with the officials of district administration.

The congress general secretary and in charge of UP Priyanka Gandhi would be visiting Lakhimpur on Monday to meet the families of deceased farmers. Priyanka Gandhi has already sent a team of congress leaders on the spot. The congress state general secretary Saif Naqvi, state secretary Abhishek Patel, Gurmeet Bhullar and former MP Jafar Ali have reached the spot on Monday and met with the agitating farmers. According to a senior congress leader of UP, Priyanka would be coming back from Delhi to Lucknow on Monday and immediately she will leave for Lakhimpur.